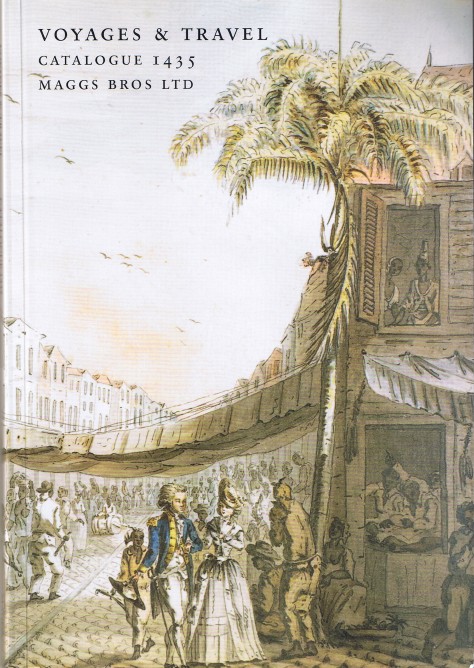 The historic London bookselling firm of Maggs Bros. Ltd. has issued its 1,435th catalogue: Voyages & Travel. It includes books that cover trips all over the world, so Maggs Bros. has grouped the books into regions which include the Americas, Near and Far East, Africa, Europe, Asia, Australia, even the Arctic and Antarctic. There is much in the way of discovery to be found in this catalogue, which takes you back to an era of great adventure. These are a few of the items being offered by Maggs.

Item 461 is a very rare work of early Americana, God's Protecting Providence... Evidenced in the Remarkable Deliverance of Robert Barrow with divers other persons, from the Devouring Waves of the Sea, amongst which they suffered Shipwrack [sic]: And also, From the Cruel Devouring Jaws of the Inhuman Canibals [sic] of Florida, by Jonathan Dickenson. This is a gripping story of a group of people, including the author and Barrow, shipwrecked along the Florida coast. They were captured and robbed by Indians, but allowed to proceed by foot up the coast to St Augustine, 200 miles away. There they were befriended by the Spanish and sent north, first reaching Charleston after another arduous trek, and finally Philadelphia. Wright Howes says of their story, "The almost incredible adventures of these men, women and children in the hands of their Indian captors and their hardships and hunger endured on a march from Southeast Fla. to St. Augustine and along the wild coast of Ga. and Carolina to Charleston can not be equalled either in fiction or history." This book provides one of the best accounts of 17th century Florida Indians as well as the coast from St. Augustine to Charleston. Offered is one of two printings of the 1700 second edition, this one from London (the other is from Philadelphia). The 1699 Philadelphia first edition is considered unobtainable, with the second edition, as described during the Streeter sale of 1967, as "almost as rare as the first edition." Priced at £16,000 (British pounds, or about $26,532 in U.S. dollars).

Item 293 is an account of a very different, though also quite dangerous adventure. It is Richard Burton's Personal Narrative of a Pilgrimage to El-Medinah and Meccah, published in 1855-1856 (three volumes). Maggs describes this as, "...perhaps the most famous of Burton's travel books," of which he produced many. Burton disguised himself a Moslem pilgrim in order to make the sacred journey to Mecca, the first English Christian to do so. Naturally, Burton had to become very familiar with the language and customs of his fellow pilgrims. £8,750 (US $14,502).

Here is another item for Burton collectors: Journal of the Bombay Branch of the Royal Asiatic Society, from January 1849. This includes the first printed work produced by Burton. Item 337. £2,500 (US $4,143).

Item 363 is a rarely found early Spanish-American War piece, Spanish-American War, 1898. The USS "Baltimore", at the Battle of Manila Bay... The war was barely a week old when this battle took place on May 1, 1898. The American forces commanded by Admiral George Dewey won a decisive victory that day. Within a couple of months, the war was over and America controlled the Philippines. £850 (US $1,408).