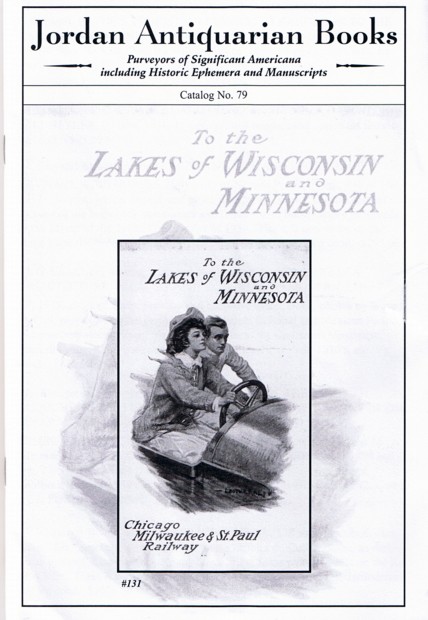 We just received our first catalogue from Jordan Antiquarian Books, though it is Catalog No. 79 for this Dorset, Vermont, based bookseller. Their specialty is "significant Americana," including books, manuscripts, and ephemera. It would appear that anything related to America could show up in this catalogue, but we will mention that there are a great many items relating to recreational travel to be found in number 79. These include resort brochures and flyers/schedules for various railroads from the day when that was the primary means of getting from one place to another. Jordan has an interesting collection of the old and obscure, along with a few more recent items in the field. Here are some samples.

Hon. Charles Augustus Murray was a British nobleman, later diplomat, who spent several years during the 1830s traveling to exotic places. His most notable adventure came when he spent some time with the Pawnee Indians on the American frontier. His description of this tribe at a time when it was still only lightly influenced by western culture is contained in this 1839 first edition, Travels in North America During the Years 1834, 1835, and 1836. Including a Summer Residence with the Pawnee Tribe of Indians in the Remote Prairies of the Missouri... This book is regarded as one of the best accounts of traditional Pawnee culture. Item 75. Priced at $750.

That's an interesting image on the cover of this catalogue. The stylish couple appears to be driving an automobile, though right-hand drive is surprising for America, and a woman doing the driving would certainly be unusual for 1910. Of course, To the Lakes of Wisconsin and Minnesota is not a promotion for automobile travel. It was published by the Chicago Milwaukee and St. Paul Railway, and roads being what they were at the time, you would have needed to take the railroad to the lakes, even if you owned an automobile. Item 131. $165.

Item 129 is a fold-out brochure that reminds us of political as well as physical changes. The heading reads Mexican International Railroad. International Bridge Over the Rio Grande Between Ciudad Porfirio Diaz, Mexico and Eagle Pass, Texas. The brochure was printed in 1891. The early railroad bridge to Mexico from Eagle Pass has long been an important gateway to trade and crucial to the development of the communities on each side of the border. However, while Eagle Pass is still "Eagle Pass," "Ciudad Porfirio Diaz" is no more. The town was originally known as "Piedras Negras," or "black rocks" for the coal deposits in the area. However, in 1888, Mexican dictator Porfirio Diaz had the city renamed in his honor, like Leningrad and Stalingrad. After the Mexican Revolution, when Diaz was sent off to exile, the city reclaimed its original name. The bridge, which still stands, is now known as the Union Pacific International Railroad Bridge. $495.

Item 123 is a four-page foldout promoting a spectacular tour of an old Colorado road to the gold mines near Pike's Peak. The heading is Corley Mountain Highway. Colorado Springs to Cripple Creek, published in the 1930s. The Corley Mountain Highway was originally a railroad bed, built by the Colorado Springs and Cripple Creek District Railway in 1900. Like so many local railways of the time, especially those not built until the beginning of the automobile era, it struggled to stay afloat. A couple of ownership changes and less than two decades later, the line was closed down, the track torn up. Enterprising local cattleman W.D. Corley turned the old right-of-way into a tourist toll road, renamed Corley Mountain Highway. He kept it going until 1939, when the Forest Service took over the road. It is currently known as Gold Camp Road or Forest Service Road 370, and runs from Colorado Springs to the ghost town of Goldfield, high in the mountains. $35.

Here is an item for anyone interested in the history of firefighting in Everett, Massachusetts. It is the records of Engine Company No. 2 from 1897 to 1906. It includes minutes of meetings, fines levied against members, records of purchases and celebrations - all of those things firefighters do when they aren't fighting fires. Item 3. $125.

Item 101 is an early guide to the White Mountains of New Hampshire: The White Mountain Guide Book. This is the first issue, from 1858, of the Eastman White Mountain Guides, but Eastman's name was not included until the following year's edition. The White Mountains had only been opened to serious tourism a few years earlier with the arrival of the first railroads, but it was still a long and difficult journey even from Boston to reach this place of cool nights during the oppressive summer heat of the Northeast in the days before air conditioning. $550.