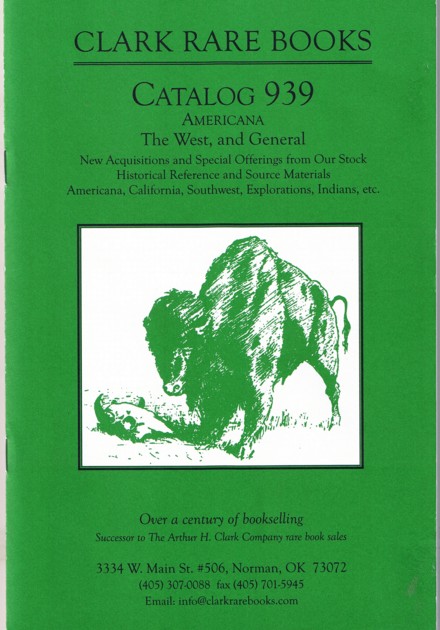 The West and other places from Clark Rare Books.

Clark Rare Books has issued Catalog 939 of Americana, The West, and General. Clark has long specialized in books about the American West, though there are a few exceptions in here. Books about the Holy Land, Perry's opening of Japan, and the other Wyoming - Wyoming, Pennsylvania - attest to the fact that there are some non-Western titles. Still, most concern that rugged, untamed land of yesterday, the great frontier that drew Americans' imaginations to the pages of books such as those offered by Clark Rare Books.

Item 43 is a recent biography of the youngest member of the Lewis and Clark expedition: Sakagawea's Child: The Life and Times of Jean-Baptiste (Pomp) Charbonneau, by Susan Colby. The nickname was given him by William Clark. "Pomp's" father, French-Canadian trapper Toussaint Charbonneau, had been hired on as an interpreter. His Indian wife, Sacajawea, was also taken along for her ability to converse with, and seek assistance from, the Shoshone Indians they expected to meet along the way. Jean-Baptiste was born at Fort Mandan on the trip west. In the years following the expedition, after the death of Sacajawea and the return of Toussaint Charbonneau to the wild territory, Jean-Baptiste came under the care of Clark. Clark put him through school in St. Louis, and in 1823, he moved to Europe for a six-year stay. He became fluent in several languages before coming back to America in 1829. He then returned to the wilds, working as a trapper, scout, and because of his fluency in several languages, an ideal guide. Jean-Baptiste would also become friends with many of the legendary "Mountain Men" of the 1840s. He guided the Mormon Battalion in the Mexican War to California, where he would be poised to participate in the Gold Rush. It does not appear that he made much money this way, but continued working in California until 1866, when he set off for the new gold fields of Montana. Unfortunately, he contacted pneumonia and died en route. This book is priced at $45.

When you start from California, it's hard to "go west," so George DeLong's expedition for the U.S. Navy went north. The purpose was to find a route to the North Pole, but they got trapped in sea ice well short of their destination. Item 93 is the official government report, Loss of the Steamer Jeanette. Record of the Proceedings of a Court of Inquiry, published in 1883. After 19 months of drifting in the ice, the Jeanette was crushed by its force. The men escaped in three small boats, one of which was lost, one of which was rescued, and one which made it to Siberia, where most of its travelers perished from cold and hunger, their commander included. $235.

A few years earlier, another American mission had attempted to reach the North Pole, with a similar lack of success, though not so many casualties. In 1871, the Polaris, under the leadership of Charles Francis Hall, attempted to reach the pole via the Atlantic. The positive outcome of this trip was that the Polaris reached father north than any ship had before. Just about everything else about this mission was not so impressive. Hall was not particularly well-suited for the job, and his micromanagement made enemies. In the midst of their attempts to go farther north by sledge, Hall became gravely ill. Suspicious of some of his mates, Hall refused their help, fearing he was being poisoned. Nevertheless, he continued to deteriorate, and within a few days he was gone. Apoplexy (stroke) was the official explanation, though his exhumation years later indicated arsenic poisoning. Command fell to others who were even less competent than Hall. A large group managed to get separated from the ship, and drifted almost 2,000 miles on an ice floe before being rescued. Meanwhile, the Polaris ran aground with the others, and it was not until the following summer that they made their way to safety. It is doubtful whether either group would have survived without the assistance of Inuit guides. Item 99 is Arctic Experiences: Containing Capt. George E. Tyson's Wonderful Drift on the Ice Floe, A History of the Polaris Expedition, Cruise of the Tigress, and Rescue of the Polaris Survivors, edited by E. Vale Blake, published in 1874. $135.

Item 192 was a plea on behalf of Kansas farmers from a wealthy New York inventor who traveled to this troubled place in 1860: The Prayer of Thaddeus Hyatt to James Buchanan, president of the United States, in behalf of Kansas...setting forth its deplorable destitution from drought and famine. Kansas had suffered terribly from the infighting of "Bleeding Kansas" in the late 1850s, as it became the first battleground between slavery and anti-slavery forces. It certainly did not need drought and crop failure on top of this, but that is what it got. Hyatt traveled to Kansas at the time, and personally oversaw the distribution of food, clothing, and money to its stricken residents. While this item pertains to his less controversial charitable works, it should be noted that Hyatt was also a strong abolitionist, a friend of John Brown who was imprisoned for refusing to answer questions to the Senate about the latter's movements prior to his raid on Harper's Ferry. Hyatt wrote letters agitating for abolition from his cell. $275.