Custer, Wounded Knee, and the West from Old West 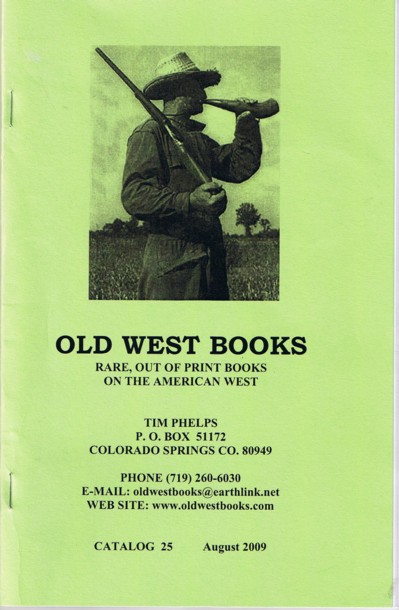 Custer, Wounded Knee, and the West from Old West

Old West Books has released their 25th catalogue of Rare, Out of Print Books on the American West. It is divided into sections on Custer, Wounded Knee, and everything else. The Old West may have gone the way of the stagecoach, cattle drive, and timely rail service, but it lives on in the pages of this catalogue. Here is your chance to travel back to the days of cowboys and cattle rustlers, lawmen and outlaws, soldiers and Indians, and buffalo as far as the eye can see. Here are a few items to be discovered in this newest look at the Old West.

Here is an ironic title from the last great battle of the Indian wars: The Wounded of the Wounded Knee Battle With Remarks on Wounds Produced by Large and Small Caliber Bullets. This is the first separate printing (1892) of an article that originally appeared in the Boston Medical and Surgical Journal. This work provides a collection of case studies from the attending physician at the battlefield, Charles Ewing. It includes names and details of injuries, including a description of amputating an Indian woman's leg on a table covered with hailstones. This copy is inscribed by the author. Item 4. Priced at $975.

Now here's a look at Wounded Knee from a different perspective. While the last great Indian battle, Wounded Knee was actually more a massacre, with overwhelmed and defenseless Indians being butchered on the snow-covered Pine Ridge Reservation of South Dakota. Item 40 is a revealing letter from January 15, 1891, two weeks after the massacre, written by the former Indian agent for the reservation, Valentine McGillycuddy. McGillycuddy had served as Indian Agent until 1886. The recipient of the letter was General Leonard Colby of the Nebraska National Guard. Colby and his troops were sent to protect northern Nebraska settlements from any fighting that might spill over the Dakota border from the battle, but it was so quick and one-sided that this never happened. Colby did proceed to Wounded Knee after the fighting, which is likely where he received this letter. McGillycuddy spells out many of the causes of the uprising, noting the repeated breaking of treaties by American officials, failure to provide promised food that led to near starvation, and the incompetence and ignorance of his successors as Indian Agent. $7,500.

Item 98 is the story of Utah's first white settler, and no, he was not Brigham Young or one of the Mormon settlers. His name was Miles Goodyear, a 19-year-old orphan who arrived in Utah in 1836 with the Whitman-Spaulding missionary party. Goodyear decided to stick around, becoming a trapper and one of the legendary mountain men of the era. He then built a fort on the Weber River, which he named "Fort Buenaventura." He was there to meet the arriving Mormon pioneers, and encouraged them to settle along the river. Brigham Young chose a site to the south instead. However, the Mormons later purchased the fort, and developed the city now known as Ogden on the site (the fort is now a state park and Goodyear's home still stands at a separate location). After the sale, Goodyear moved on to California and participated in the early days of the Gold Rush, but died in 1849 at the age of 32. The book is entitled Miles Goodyear First Citizen of Utah; Trapper, Trader and California Pioneer, by Charles Kelly and Maurice Howe. It was published in 1937 in a limited edition of 350 copies. This one is signed by Howe. $450.

Tom Horn was a lawman, detective, Pinkerton agent, scout, soldier, and agent for some cattle companies. He was a man who pushed the envelope in pursuit of his version of justice. It was in his role as private detective and agent that he went too far, reportedly killing a number of thieves and cattle rustlers. It was his representation of wealthy special interests that made him unpopular with average citizens. This unpopularity would come to a head in 1901, when Willie Nickell, the 14-year-old son of a smalltime rancher, was murdered. Suspicion quickly fell to Tom Horn, who stuck both feet in his mouth during a two-day, boasting-filled drunken confession. Item 89 is Life of Tom Horn Government Scout and Interpreter Written By Himself Together With His Letters And Statements By His Friends A Vindication. Perhaps this 1904 book vindicated him, but it was too late for practical effect. He was hanged in 1903 for the murder of Nickell. There is serious doubt as to whether Horn murdered the young man, but that didn't bother the people of Wyoming too much because while he may not have murdered Nickell, he surely murdered a few others for whom he was never tried. $575.