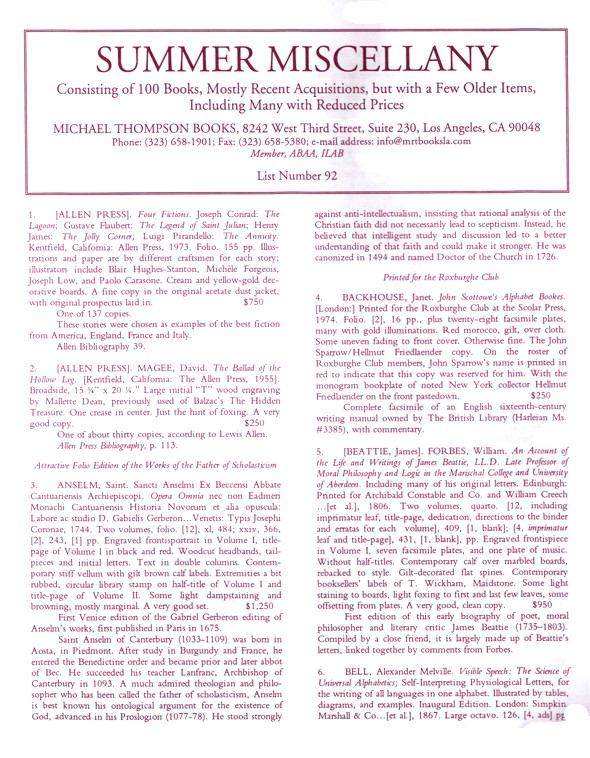 We recently received our first catalogue from Michael Thompson Books of Los Angeles. This is certainly a venerable firm, having been formed by Michael Thompson in 1972, long before most of the world's population was born. Experience is always valuable. Partners include Mr. Thompson, Kathleen Thompson, and Carol Sandberg.

This catalogue is titled Summer Miscellany, or List Number 92. It consists of 100 items, somewhat difficult to pinpoint. The closest I can come to a common thread is that these are works that will appeal to those who collect in the more intellectual of fields, perhaps university related. There are works in philosophy, science, and mathematics, along with items in the book arts and a smattering of literary works. These are books that will stretch your mind, though I must admit that some, particularly in mathematics, stretch my brain well beyond its limits. Here are some samples of the types of works being offered by Michael Thompson Books.

Item 19 is a book from the dawn of the modern world, that is, the computer era. It is Calculating Instruments and Machines by Douglas R. Hartree, published in 1949. Hartree was a mathematician and physicist, an expert in the field of electronic calculation. This work includes chapters on analogue and digital computing, the early mechanical computers of Babbage, plus plans for some of the earliest versions of what we now think of as computers, EDVAC and UNIVAC. These monstrous machines could not match the computing power of an ordinary cell phone today, yet they seemed astonishing in their capacities just 60 years ago. Priced at $350.

Item 6 is an interesting work from 1867 entitled Visible Speech: The Science of Universal Alphabetics... This was a system of symbols for phonetic sounds, the symbols meant to mimic the appearance of the mouth when speaking the sounds. Such a set of symbols would enable anyone to read the sounds (if not understand the meanings) of any language. The particular use for these phonetic symbols was to aid deaf persons in being able to speak correctly. The author of this work was Alexander Melville Bell, a familiar sounding name to be sure. Melville Bell's son was the far better known Alexander Graham Bell, inventor of the telephone. The younger Bell learned his father's system and was said to be able to mimic the accents of any language from reading the symbols. Graham Bell was greatly interested in his father's work, and later improved upon it, even while creating that other device for which he is remembered. $750.

Item 77 is On The Connexion Of The Physical Sciences, an 1834 work by Mary Somerville. Mary Somerville was a remarkable woman. Women weren't exactly encouraged to enter the sciences in 1834, nor much of anywhere else requiring intellectual abilities. Nonetheless, she not only became very learned, but was able to explain difficult scientific concepts in language those less gifted than her could understand. The result was her writings, of which this is her second, became quite popular, while Mrs. Somerville's work was well-respected by the leading scientists of her day. $600.

Broadsides have become very popular with collectors recently, perhaps because of the ease with which they can be framed and displayed. They were not highly regarded a century ago, but the families of Alexander and James Lindsay, Earls of Crawford, felt differently. They put together a magnificent collection of British broadsides back in the 19th century. Item 8 is a look at that collection: Bibliotheca Lindesiana: Catalogue of English Broadsides 1505-1897, published in 1898. It is one of just 100 privately printed copies covering over 1,800 items in the collection. The library began to be dispersed almost a century ago and no longer exists. $450.

Item 84 is a lengthy French manuscript, circa 1850, on spinning and weaving. It is filled with carefully drawn illustrations of machinery as well as some patterns. Someone went to great effort to create this look at the production of cloth with what was the latest equipment a century and a half ago. $2,500.