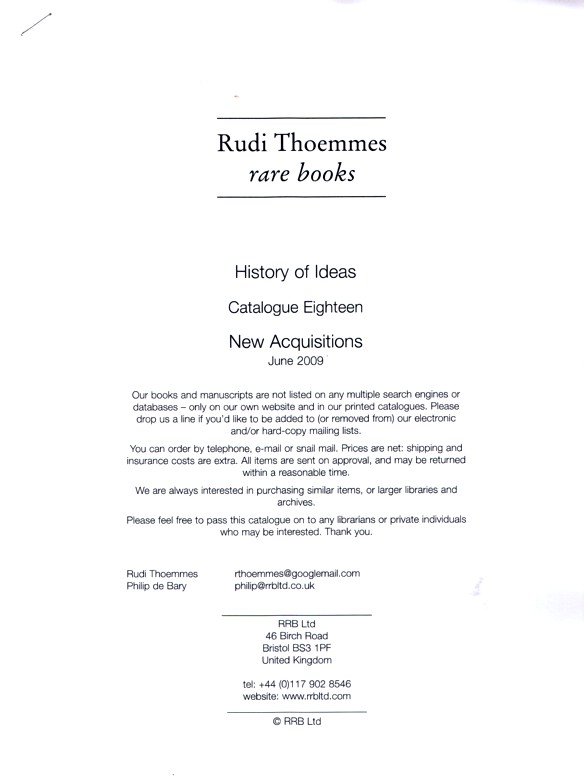 We have received the latest presentation from Rudi Thoemmes Rare Books, their 18th catalogue, History of Ideas. Thoemmes specializes in books of philosophy, covering the great thoughts, and the not-so great thoughts, of man. Most of these go back to the days when science, philosophy, and religion were more intertwined than they are today. Observation and the scientific method have made these more distinct pursuits, but these earlier philosophers did not have the benefit of today's scientific knowledge. Here are a few of these historic works of thought.

We start with item #1, an important Dutch work concerning witches: Nodige bedenkingen Op de niewe beweegingen... by Balthasar Bekker. In it, he argues against beliefs in the existence of witches and other spirits. This may not sound controversial now, but it did at the time. There were many people who believed that denying the existence of the Devil and evil spirits amounted to denying the existence of God and the validity of religion. This work is a response to an attack on his book of a year earlier. Bekker maintained that outside of the human soul, there was no interaction between the physical and spiritual world. Therefore, we could not be visited by unearthly apparitions, including those who invaded human bodies. This applied to evil as well as angelic spirits. This view was considered heretical by many, but it has been said that Bekker almost single-handedly put a stop to the support for witch trials in northern Europe. Indeed, the timing of this book - 1692 - will be familiar to Americans who have studied the Salem witch trials. Priced at £650 (British pounds, or approximately $1,072 in U.S. currency).

The antagonism Bekker caused can be seen in item 2: Ondersoek en antwoord Van Balthasar Bekker... This is a 1693 account of the church proceedings against Bekkar, along with his replies. Fortunately, while witches might still be burned at the stake at this time, such punishments were no longer routinely handed out to those with controversial religious views, so not much came out of this. £600 (US $990).

Speaking of witchcraft and the supernatural, Joseph Glanvill is a most interesting fellow. Glanvill was a 17th century English clergyman and philosopher. He was one of the foremost proponents of scientific observation and religious tolerance. His attitudes on these subjects made him a target of those with conservative religious views. However, Glanvill was also a believer in witches and other such apparitional beings. He was among those who believed the Bible pointed to their existence, so to disbelieve that such spirits were interacting with the physical world would amount to disbelieving religion itself. One wonders how Glanvill would have reacted to the excesses of Salem, but he died in 1680, before the worst consequences of belief in witchcraft began to play out. Item 14 is his Essays on Several Important Subjects in Philosophy and Religion, published in 1676. £1,250 (US $2,062).

Most with an interest in philosophy would know what Immanuel Kant wrote, but how many know what he read? Item 29 is Immanuel Kants Bucher. This is an account of what was in his library by Arthur Warda, published in 1922. On his death in 1804, Kant left his books to his mathematician friend Johann Genischen. Genischen died just three years later and in 1808 his library was put up for auction. Warda's book covers the 377 lots from that auction that originated in Kant's collection. £100 (US $165).

John Stuart Mill was a strong believer in personal liberty, so long as it did not result in harm to others, and supported many liberal causes of his day, including women's suffrage. However, one such liberal idea, that he once supported but changed his opinion upon, was the secret ballot. Most liberal thinkers argued for it, believing voters would not vote their conscience out of fear of retribution from those in power. Mill's concern was that they would vote for their uglier personal interests, rather than the ideals they espoused, if allowed the secret ballot. Public voting would force people to vote their ideals. Item 39 is a letter expressing these views he wrote to the Editor of the Birmingham Post on July 29, 1868. £1,200 (US $1,979).