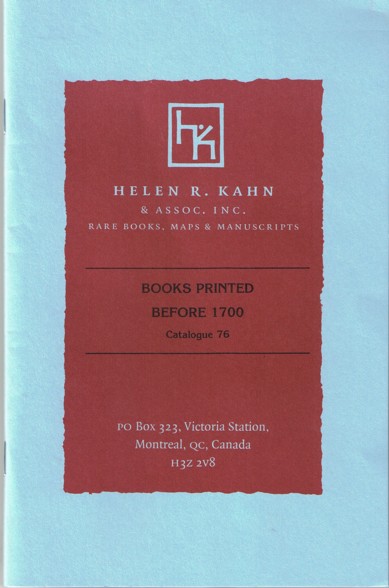 Helen R. Kahn and Associates has released a catalogue which will appeal to collectors of antiquarian books. The title is Books Printed Before 1700. This is a collection of 16th and 17th century books primarily in Latin, French and English (with some German and Italian) about many varied subjects. Quite a few pertain to the still new and relatively unexplored lands of the Americas. Many others pertain to political intrigues of England during this time. Anyone interested in books from this era will likely find something of interest. Here are a few samples.

Item 17 is an account of a mission to New France in the mid-17th century by the Italian Jesuit Francesco Gioseppe Bressani: Breve Relatione d'Alcune Missione de' P.P. della Compagnia di Giesunella Nuova Francia, published in 1653. Bressani was 30 years of age in 1642 when he secured approval to mission to the Indians of New France, today's Canada. He spent some time in Quebec and Three Rivers before attempting the arduous journey far inland to the land of the Hurons. He didn't make it. Bressani was captured by a band of Iroquois who mutilated and tortured him. Somehow, he managed to survive several months of abuse, long enough to be ransomed by the Dutch. Bressani returned home, but undaunted by his experiences, shortly returned to New France. He spent most of the next five years assisting the Hurons, who were in the process of being virtually wiped out by their Iroquois enemies. In 1650, Father Bressani returned to Italy where he remained the rest of his life. Priced at $16,250.

Life was better for the Hurons in the days before Bressani and their rout by the Iroquois. One of the earliest looks at their nation comes from Gabriel Sagard-Theodat, published in 1632: Le Grande Voyage du Pays des Hurons... Sagard was one of the few non-Jesuits to visit the era early. He was a Recollet missionary who spent a fairly short time, from 1623-24. His work is a sympathetic look at the Hurons before being forced from their homeland on today's Lake Huron. It also contains the first printed Huron vocabulary. Item 83. $35,000.

John Evelyn was a 17th century English writer whose diaries provide one of the better looks at English society of the era. He was one of the founders of the Royal Society in 1660, the world's longest running scientific society. Two years later, he gave the address that formed this 1664 book: Sylva, or A Discourse on Forest-Trees and the Propagation of Timber in His Majesty's Dominions. This is a very early treatise on forestry management and environmentalism, as Evelyn argued for replanting of trees that were being wiped out by the glass factories and iron furnaces. Item 40. $3,250.

Some medical advice is dated. Item 95 is Hymnus tabaci, by Dr. Raphael Thorius. Of course, medical knowledge was not as advanced in 1651, but Dr. Thorius certainly got it wrong with this tribute to medicinal values of tobacco. This is the second London Latin edition of a work that was very popular at the time, meaning it must have been terrible for the nation's health. Thorius believed tobacco was good for just about every internal organ, including the lungs, and he sings its praises in this misguided poem. $700.

Pietro Bembo was a great literary figure in early 16th century Italy. He wrote and translated prose and poetry in both Latin and Italian. Late in life, he was named a Cardinal. He was appointed a secretary to the Pope after Giovanni de Medici was elected to the position in 1513. As Leo X, the new Pope greatly appreciated the arts and letters. Indeed, he turned Rome into a cultural center, while at the same time providing aid to the poor. All of this cost a lot of money, leading Leo X to overspend his treasury, sell indulgences, and rack up debts. Nevertheless, he seems to have been a good-hearted man and Bembo was able to prosper. Item 14 is Petri Bembi Epistolarum Lepnis Decimi Pont. Max. This is a 1538 edition of letters Bembo wrote on Leo's behalf. A year later, Bembo was named a cardinal. However, Leo X's papacy ended with his death in 1521, and it should be noted that while he was focused on fundraising and literary pursuits, at the same time Martin Luther was posting his 95 theses that would tear apart the Church. $1,950