"On Paper" from Marc Selvaggio, Bookseller 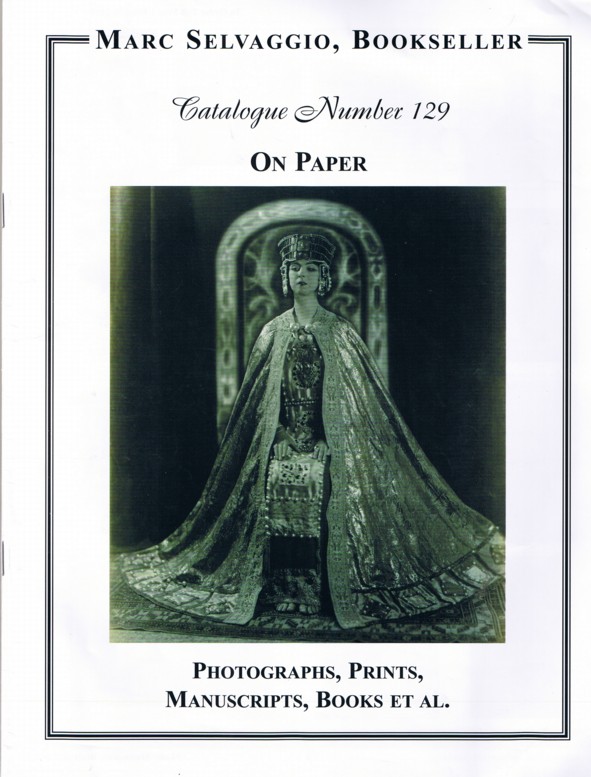 "On Paper" from Marc Selvaggio, Bookseller

Marc Selvaggio, Bookseller, has issued Catalogue 129. On Paper. Photographs, Prints, Manuscripts, Books et al. If it's printed on paper, it might be here. Selvaggio finds many unusual items, along with some notable books, particularly on 19th century travel and exploration in continental America. However, we will admit to being drawn to the uncommon and unusual, so that will be our focus as we look inside the pages of this intriguing catalogue.

For those who like seeing double, item 31 is the personal scrapbooks of Joseph H. Tiden pertaining to twins. His connection to twins is unknown. Perhaps he had twin children or was a twin himself. Whatever the reason, he was fascinated by them. These books contain 348 photographs taken at various twin rallies and conventions in Illinois and Indiana from 1947-1949. They document such events as the Le Roy Twin Rally and the Illinois Twins Conclave, events now lost to time, or at least lost to Google searches. However, the annual conventions of the International Twins Association continue to this day. You might like to plan for the 2009 edition (it takes place in San Antonio in September). Tiden attended the 1949 meeting, the 15th for this organization founded in Indiana that regularly met there during its early years. The scrapbooks also contain 23 newspaper clippings, and even contains information on the Harris triplets of Muncie who harmonized on barbershop songs. Priced at $400.

Item 7 is another photo album, this one compiled during the Civilian Conservation Corps construction of a "road around the rimrock" (now known as "Rimrock Drive") in Colorado National Monument. Newly elected President Franklin Roosevelt was adept at pumping up the economy. He formed the CCC shortly after taking office, and by early spring of 1933, CCC workers were constructing this highway along the rim of the monument. It was a great way to stimulate the economy, as travelers to western Colorado use this road to enjoy the spectacular views to this day. This album contains 21 pages with two photographs and captions each, plus 48 loose snapshots and a 1934 map of the park. $400.

Here is one more collection of photographs, but this is a published book: Sleeping Beauty: Memorial Photography in America. This is a recent book (1990), but the pictures range from 1840-1930. They display what was apparently a once common practice - taking photographs of recently deceased people, often children, and frequently with a living family member. That sounds macabre but standards must have been different then. Item 98. $250.

There was a time when General Motors ruled the road, and one of their popular brands was the Oldsmobile. It exuded power and luxury, just one step below the Cadillac. Item 152 is a sales book for the 1953 model, headed Oldsmobile Rockets Ahead in Engineering Progress... That, of course, is a play on the famous Rocket 88, produced from 1949-1999 (Oldsmobile itself ceased production five years later). Let me introduce you to my Rocket 88! This six ring binder book includes a brochure about the car, 78 mounted fabric and leather samples, and color panels to select the color for your 88. Come away with me, Lucille. How could G.M. forget the excitement? $350.