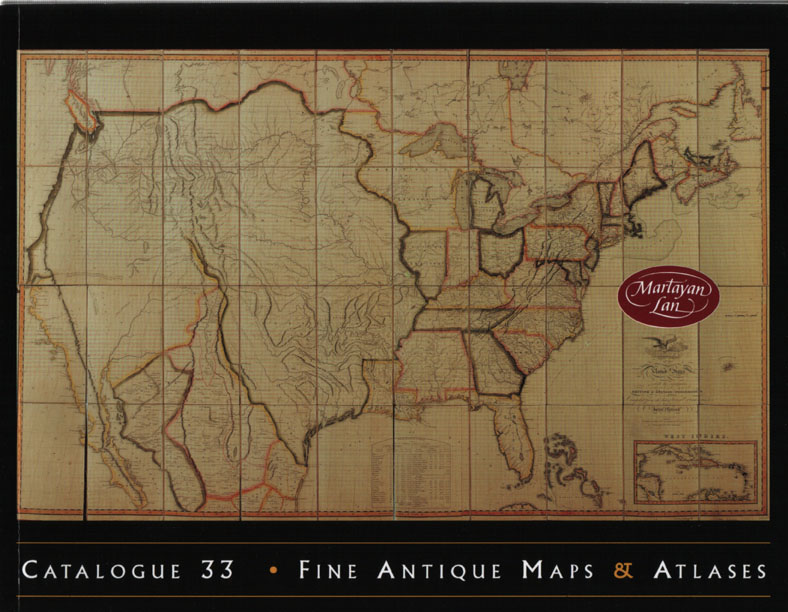 This month Martyan Lan is offering its Catalogue 33, “Fine Antique Maps & Atlases.” Maps are a specialty of this New York City bookseller and they regularly offer some of the finest ever produced. This collection dates from the late 15th century through the 19th and includes maps covering territories as large as the entire world and as small as the island of Bermuda. Other specific areas covered include the various regions of the United States, Canada, Africa, Europe, Asia, Australia, South America, and the Holy Land.

Item 5 is Abraham Ortelius’ atlas, Theatrum Orbis Terrarum, the first modern and perhaps greatest of all atlases. First printed in 1570, Ortelius kept expanding the number of maps with each succeeding edition. After his death in 1601, the plates were turned over to Jan Baptist Vrients, who continued publishing until 1612. The copy here offered was produced by Vrients, and appears to be a transitional version between his 1602 first edition and the one of 1603. It contains 118 double-page maps plus 38 others, all in contemporary color. Price not listed.

For those interested in a less “modern” map, item 9 is a Hartmann Schedel world map from the time of Columbus. Dated 1493, there are no Americas in this map of the world. Indeed, much of the world slides off of the edges of the map into the unknown, and outside of Europe, it is a bit of a challenge to recognize the remaining lands. Images of mythical creatures thought to exist in far off lands run alongside the map. The wave of voyages now beginning would change this image of the world, though it would still take many centuries to accurately complete the mapping. Item 9. $23,000.

Schedel would be followed by another German-born mapmaker, Sebastian Munster, who would produce maps from Switzerland. As might be expected from a “Munster,” some of these maps appear strange. Item 61 is a map of a very flattened Africa, much longer east-west than north-south. However, at its approximate date of 1550, Munster had very limited resources from which to work. $1,300. Item 64 is another circa 1550 Munster map, this one of Europe, and it is almost impossible to make sense out of it. The problem is Munster’s creative touch: he turned the continent upside down. South is at the top, north the bottom. Italy sticks up straight, pointing toward the top. Of course the continent becomes instantly recognizable when you turn the map around, but then all of the writing is upside down. $1,200.