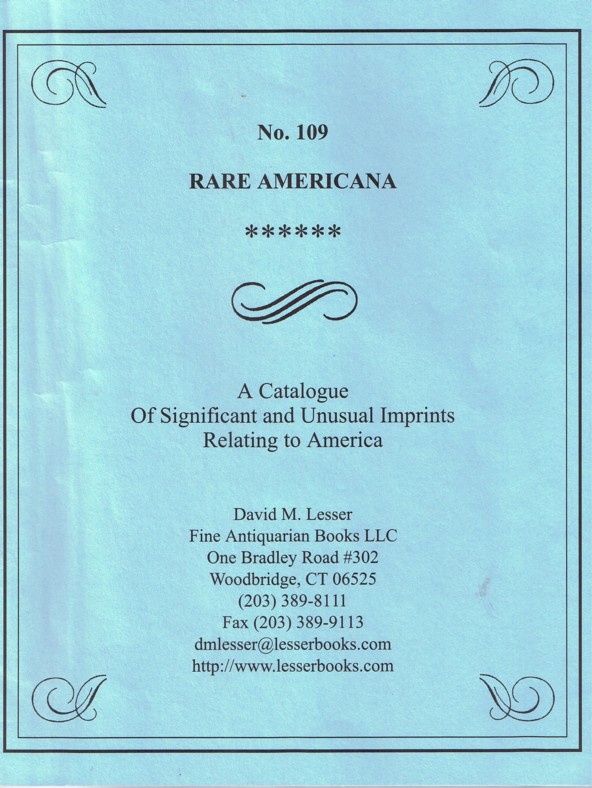 David M. Lesser Fine Antiquarian Books has now issued their 109th catalogue of Rare Americana. This is a collection primarily of 18th and 19th century pamphlets concerning what were the burning issues of the day. These are not works about history. They are history being made. Anyone with a love for Americana will appreciate a Lesser catalogue as these are eyewitness reports of America either before or during the early stages of its being a free nation. Here are just a few of the items available this time.

Item 114 is an important, though unheeded speech, given in Parliament in England by former Prime Minister William Pitt (aka the Earl of Chatham): The Speech, of the Right Honourable the Earl of Chatham, ...January 20th, 1775. On a Motion for an Address to His Majesty, to Give Immediate Orders for Removing His Troops from Boston Forthwith, in order to Quiet the Minds and Take Away the Apprehensions of His Good Subjects in America. Pitt understood the magnitude of the troubles brewing in America far better than most British politicians, and certainly the King. Pitt argued that taxes should only be imposed with the consent of the colonists, perhaps the major issue leading to the Revolution. Pitt claimed that "violent, precipitate and vindictive misrepresentation" had led to "intolerable wrongs" in the colonies, which were quickly uniting against Britain. Pitt called for removal of troops from Boston and repeal of all offensive acts. His calls went unheeded, but his belief that the colonists would end up succeeding if they revolted proved to be true. Offered is one of two American printings of this address from 1775, from Philadelphia. Priced at $2,500.

Just as there were British sympathetic to the American revolutionary cause, there were Americans unsympathetic. Item 110 is A General History of Connecticut... By A Gentleman, published in London. Most of Rev. Samuel A. Peters Connecticut neighbors considered him no gentleman. Peters was a strident loyalist, whose views led to several "visits" by local patriots. He was once almost tarred and feathered, temporarily to recant, but then return to his old ways. By 1774, Peters realized it was time to get out, and moved back to England. It was there that he published, in 1781, his mocking history of Connecticut. It focused on the fanaticism of Connecticut's Blue Laws (he has been credited with creating the term "blue laws") The trouble is, Peters simply made up most of the laws to make the people of Connecticut look silly. So he had rules like no one could walk on the Sabbath, "except reverently to meeting," no one could be a freeman unless a member of an approved church, no one could celebrate Christmas, dance, play cards, or make mince pies, fornication shall result in forced marriage, adultery in death, and so on. Oddly enough, Peters returned to America a few years later and spent the many years remaining in his life in his newly independent homeland. $2,500.

Here is another incident Peters wrote about to make fun of the citizens of Connecticut, although the piece offered is not his version. Some summer evening in 1756, there was supposedly an incident in Windham, Connecticut, unprecedented and unrepeated as far as I can tell. Late at night, the good citizens were awaken from their slumbers by the most alarming outburst of shouts and cries imaginable. The frightened residents began fleeing from their homes, some not even taking time to get dressed. They feared the worst, an army of the French and Indians were coming to slaughter them. This was during the French and Indian War. A group of men were sent out with guns and began firing, but no shots were returned. However, they thought they heard the unseen soldiers call out the names of their leaders. Well, to make a long story short, not to mention ridiculous and unbelievable, it turned out to be an army of frogs, miles long, marching from a dried up mill pond to a nearby river, croaking all the way. This story bounced around for many years, with Peters picking it up and, in his aforementioned book, exaggerating it to make the people look foolish. However, many others turned this incident to verse and song, including this 19th century version, Windham Bull-Frog Song, a broadside tribute to this very strange night. Item 32. $500.