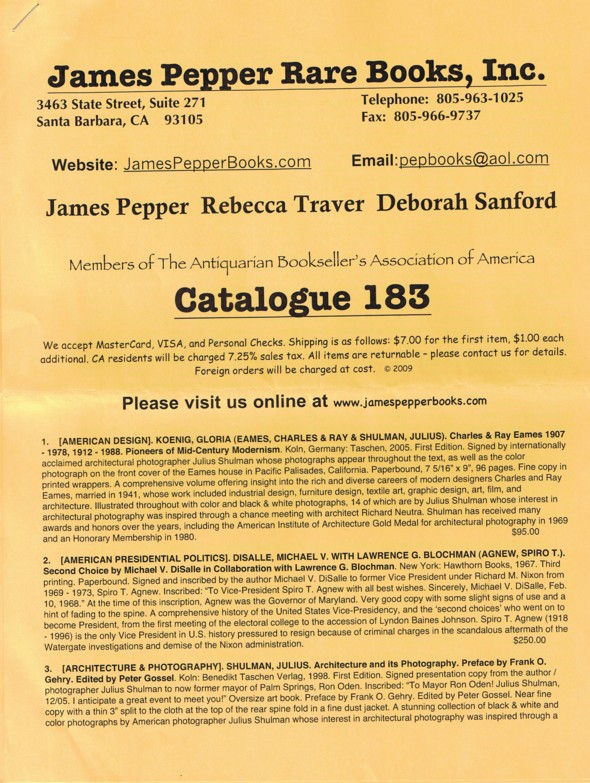 James Pepper Rare Books has issued a new catalogue, Catalogue 183, which follows their typical format, but is filled with new material we have not seen before. Literature, film and mystery are their primary subjects, with many of the items being one-of-a-kind, such as manuscripts or inscribed copies of books. There is even an unproduced, unpublished script from the Great Fitzgerald, whose attempts at screenwriting were not as successful as his book writing. Here are few items now available.

Item 53 is that archive of original manuscripts from F. Scott Fitzgerald, his attempt to write a screenplay for the film Madame Curie. A script, based on a biography written by Mme. Currie's daughter Eve, had already been started by Aldous Huxley when MGM put Fitzgerald on the job in late 1938. The plan was for this to be more of a love story about the famed scientist and her husband, Pierre, than a scientific study of their work with radiation. Greta Garbo had already been tabbed to play the leading role. Fitzgerald created 86 pages of script, 13 handwritten in pencil, 73 typewritten but filled with penciled corrections, when the project came to a halt. It had shown the Curries up to the time of their marriage. Evidently MGM and Fitzgerald saw this story differently, so by early 1939, the project was mothballed. The film was eventually released in 1943, but without Garbo in the starring role or Fitzgerald's script in the storyline. Along with the 86-page typescript are two earlier drafts, an early analysis of how Fitzgerald wishes to treat the script, his contract with MGM agreeing to write the script, and a letter to his personal typist where Fitzgerald proclaims, "I am working on the script of Madame Currie which I find very interesting." Priced at $25,000.

Here is another item for Fitzgerald collectors, the 1934 (first edition thus) printing of his The Great Gatsby. This was the first edition to carry Fitzgerald's reflective introduction, with the comment, "What I cut out of it both physically and emotionally would make another novel..." Unfortunately for Fitzgerald, this Modern Library edition was not a success, and Pepper notes that many of the copies were remaindered and have "discontinued title" stamped on the dust jacket. This copy, fortunately, did not suffer that fate. Item 52. $2,000.

Item 87 is a lengthy 1927 letter from H.P. Lovecraft to fellow writer Clark Ashton Smith. Smith, like Lovecraft, wrote about fantasy and horror. So, what did Lovecraft find to be horrible? Here are some words from his letter: "...Los Angeles appears to be a particular centre of emptiness & pretense - a nest of crazy cults & lopsided Babbitry & realtorism out of which nothing good can be expected for many mellowing generations..." Was he right about LA? You be the judge. $4,500.

Here is one of those endearing stories, The Big Love by Mrs. Florence Aadland and Tedd Thomey, published in 1961. It is the memoirs of the swashbuckling, 48-year-old actor Errol Flynn's romance with Mrs. Aadland's 15-year-old daughter Beverly. Pepper shares with us the book's opening line: "There's one thing I want to make clear right off: my baby was a virgin the day she met Errol Flynn." We aren't sure about the evening. This copy is signed by Thomey. Item 54. $200.

Item 96 is a special copy of actor Vincent Price's I Like What I Know - A Visual Autobiography, published in 1959. The book contains a printed dedication to his wife, Mary, along with a handwritten one. While Price was noted for his roles in horror films, in real life he was a connoisseur of fine arts. Mary helped him build his collection, which is described in this book. She also co-wrote a book of recipes with him. In the inscription, Price writes, referring to the printed dedication, "Darling! I mean it and I love you! Ever, Vincent." The Prices were divorced in 1974. $2,000.