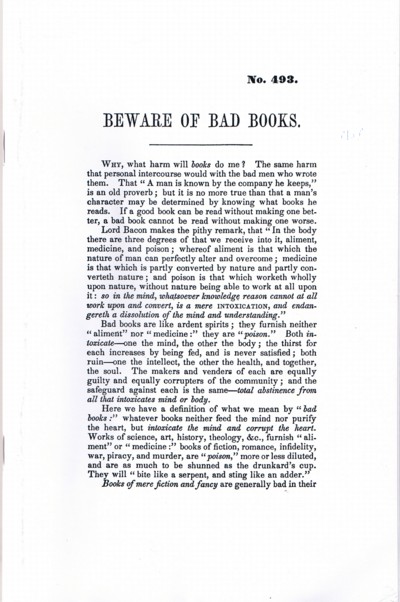 It's not often we see a catalogue with the cover warning "Beware of Bad Books." Is this the ultimate caveat emptor, a warning as to the quality of books within? Of course, not. This is an image of a page from one of the many unusual, sometimes cranky works found inside. It was a 19th century tome warning that reading cheap, immoral literature can lead one to all sorts of horrors, even murder. Anyway, you will find your share of bad books and bad poetry in this latest catalogue from Garrett Scott, Bookseller, though not "bad" in the sense of evil. Just bad. Along with these typical strange items we expect from Scott, there are many more rational pieces, with the common theme being obscurity. Scott's catalogues are fun to read, and Catalogue Twenty-Three is no exception. These are some of the items you will find.

Nothing could be more suitable for a catalogue with its share of cranks than a broadside from a man who was once arrested for being a crank. That would be J.W. Shiveley, the Saratoga (New York) "Professor," who proclaiming himself to be the Messiah, came to Washington in 1881 to cast the Devil out of presidential assassin Charles Guiteau. Instead, he was arrested. A Mesiah is not recognized in his own land, at least not this one. Back home in Saratoga, Shiveley published this broadside to help people make their selections in the 1884 presidential race, and as you can see from the title, he was still chasing the Devil: That Same Old Serpent, Old Satan, the Devil, the Great Red Dragon! The Wonderful Beast with Seven Heads and Ten Horns! As Shively explains, "This is the Two Hundred Thousand Billion Dollar Letter that Dana & Butler Refused to Publish..." You could bail out AIG with that kind of money, but apparently it still wasn't enough to convince Dana and Butler to publish his letter. Shiveley was not fond of either political party, which he incisively describes as "Gigantic European and American God and Moral, Old Monopoly, Steal Rings and Whiskey, Star Route Sneak Thief Steal Rings." A lot of people still feel that way about our political parties. Shiveley casts his lot with that "darling sweet Belva Ann Lockwood." Lockwood was a suffragist who was unable to secure the support of the leading women's rights advocates of the day, but still managed to garner 4,149 votes in her bid for the presidency. How many are attributable to Shiveley's support is unknown. They didn't have exit poles then. That was 4,870,000 fewer votes than Grover Cleveland captured. In fairness to Lockwood, she was a rational, pioneering woman, one of the first allowed to practice law in the U.S., and it is doubtful she had any connection with the eccentric Mr. Shiveley. Item 136. $275.

Item 35 is a promotional for an exhibition featuring the invented "universal" language of Esperanto: L'Esperanto dans la Vie Moderne. Esperanto en Moderna Vivo. This is a program in French and Esperanto for the exhibit at the International Exposition in Paris. Esperanto was intended to help bring the world together by providing an easy-to-learn language that all peoples would share. However, there is great irony in the timing of this attempt at universal conciliation - 1937. The Germans weren't buying into all the peace and love, and they would return to Paris just a few years later with diabolical intentions. $50.