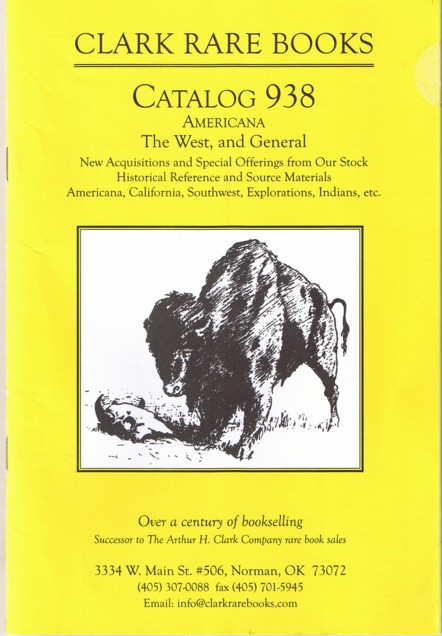 Americana and the West from Clark Rare Books.

Clark Rare Books has prepared a new catalogue, Catalog 938 of Americana, The West, and General. There are many new acquisitions available this month, along with a few new titles from the Arthur H. Clark and University of Oklahoma Presses. Without further delay we will look inside as there are some great old books being offered.

Here is an early look at American geography and more: The American Gazateer: exhibiting a full account of the civil divisions, rivers, harbours, Indian Tribes, etc., of the American Continent... The book was first published in 1797 and the author, Jedidiah Morse, was the father of the inventor of the telegraph and Morse code, Samuel Morse. Morse believed America needed a serious geography textbook, so he wrote it. This is the second American edition, published in 1804 after the Louisiana Purchase. Clark notes this is the best description of the new territory before Lewis and Clark. The book included six maps, all present with this copy. Item 21. Priced at $295.

Another notable early American geographer was Henry Schoolcraft. His early explorations brought him to the attention of Secretary of War John C. Calhoun, who recommended him for an expedition into what was then Western Michigan with Territorial Governor Lewis Cass. Schoolcraft would prove to be not only a good geographer, but geologist and ethnologist of America's natives as well. Schoolcraft wrote up the account of the Cass Expedition in Narrative Journal of Travels from Detroit Northwest through the Great Chain of American Lakes to the sources of the Mississippi River in 1820, published in 1821. They never made it to the source of the Mississippi, but Schoolcraft would be the one who discovered it twelve years later. Item 83. $525.

Americans did not limit their explorations to America. Commodore Matthew Perry led voyages to Japan in 1852 and 1854 that led to not only much information about that island nation, but forced the reluctant Japanese to open their land to trade. Perry convinced the Japanese to sign a treaty by threatening to bombard their coast with his superior firepower if they didn't. The account of this friendly visit is found in Narrative of the Expedition of an American Squadron to the China Seas and Japan, by Francis L. Hawks with Perry, published in 1856. This copy of the first edition includes all of the plates and maps, even the risqué bathing scene. It provides an excellent example of the phrase "gunboat diplomacy." Item 81. $2,450.

These trips wouldn't exactly qualify as explorations, but they would have been great fun. Item 57 consists of three brochures for the Pacific Electric Railway: See Southern California by Trolley; Orange Empire Trolley Trip; and Little Journeys to Beauty Spots in Southern California via the Big Red Cars. These are all from the 1920s, and describe sightseeing tours for those visiting Southern California in this prosperous, "roaring" era before the fall. $85.

Here is an early item still relevant today. It probably would have been even more relevant during the last election cycle. Item 8 is a Preliminary Report on Petroleum in Alaska, by George C. Martin. This was published by the Government Printing Office in 1921. Oil was plentiful and cheap at the time, the Alaska pipeline still over half a century away. It's good to know someone in the government was preparing for shortages early. Item 8. $34.

Jim White could be called the ultimate spelunker, though I have no idea whether he used that term. He was working as a ranch hand in southeastern New Mexico when he noticed a huge flock of bats arise from the ground one evening. He later tracked down their exit, a large hole in the earth. He built a wooden ladder, and with the aid of a kerosene lamp, ventured inside. He found a huge cave, with rooms full of stalactites and stalagmites, one after another. What he had discovered at the turn of the century is now known as Carlsbad Caverns, America's most famous caverns and today a national park. White's story is told in his book: The Discovery and History of Carlsbad Caverns New Mexico. White has signed this copy. $30.