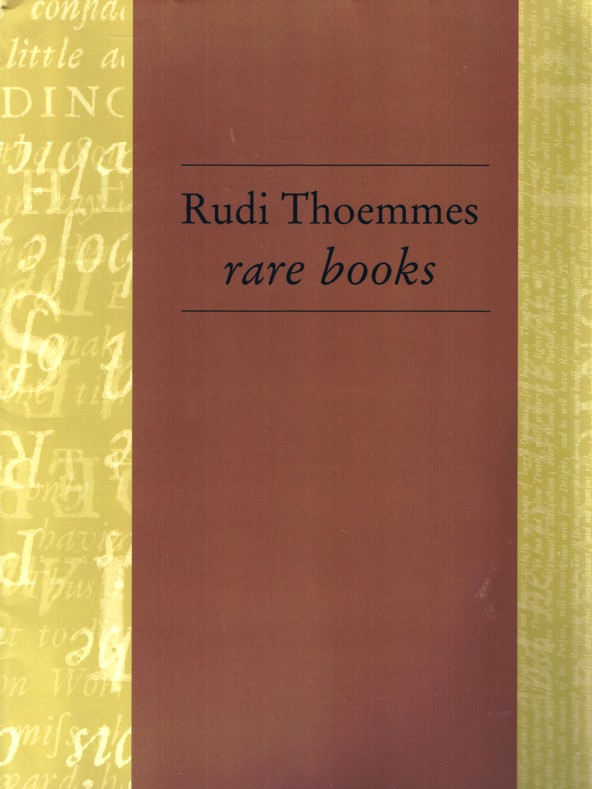 These books plumb the depths of philosophical thought, from metaphysics to morals, logic, theology, all of the issues mankind has attempted to understand over the ages, with but limited success. Nevertheless, we can give these men and women credit for their efforts, even if they have not yet determined the meaning of life. We will describe some of the material we found in this catalogue, but will stay away from the really deep stuff. I would no more attempt to describe a metaphysical text than Einstein's theory of relativity. Nevertheless, here are samples of what you will find in this philosophical and American catalogue from England.

Item 92 is the most thorough compilation of the work of the person many consider to be America's greatest philosopher: Collected Papers of Charles Sanders Peirce. This is an 8-volume set, the first six from the first edition (1931-1935), the supplemental two from the second impression (1966). Peirce is noted as the founder of pragmatism, where practical effects are part of the meaning of concepts. Peirce was more than a philosopher, being a mathematician, logician, and scientist as well. However, he did not publish a great deal during his lifetime, leaving behind much unpublished, disorganized manuscript material when he died in 1914. Fortunately, others came to appreciate his insights, and in time his works, both published and not, were collected for this large set of his writings. Priced at $850.

Item 3 is a compilation of lectures from a Harvard professor remembered for his post-professorial career: Lectures on Rhetoric and Oratory by John Quincy Adams. Adams was a professor from 1805-1809 and this two-volume collection was published in 1810. Fourteen years later, Adams was elected to the presidency of the United States. Thoemmes notes that according to a study by psychologist Keith Simonton, Professor Adams has the highest estimated IQ of any U.S. president (I'm not sure how you would determine that now, or whether that survey was done pre or post George W. Bush). $375.

Catharine Beecher came from a family which applied their philosophical beliefs to real-world issues. You might call them pragmatists. Her father was noted clergyman Lyman Beecher, her brother another noted clergyman and abolitionist Henry Ward Beecher, her sister, Harriet Beecher Stowe, the author of the seminal anti-slavery novel Uncle Tom's Cabin. Catharine was focused on educating women, not a subject deemed of great importance in this male-dominated era. Some of her thoughts would be a bit antiquated today, such as the belief that women were most suited for certain roles, such as teaching and homemaking. However, she also believed that women could effectively lead men by being their first teachers when they were young. Miss Beecher was one of the first to open an institution of higher education for female students. Item 9 is her 1835 book, An Essay on the Education of Female Teachers. $350.