A Director's Report from the Arader Galleries 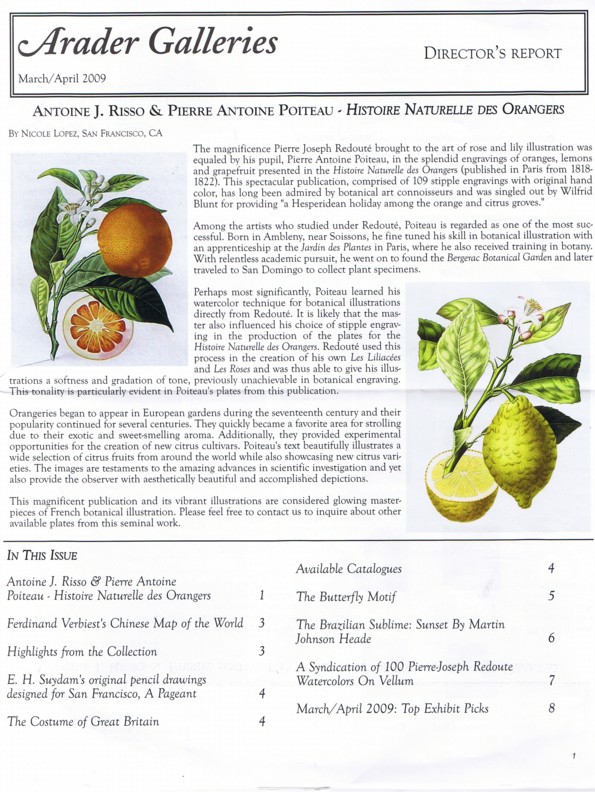 A Director's Report from the Arader Galleries

We have received the March/April edition of the Arader Galleries' Director's Report. These reports update us on what is going on, and a few of the items available at the various galleries around the U.S. They specialize in the finest works of print and art, so you will always find exciting material discussed in these reports. Here are a few of the items now being featured.

We just missed a major syndication that took place on April 25 in New York. The Arader Galleries was syndicating 100 original watercolors on vellum from the great French flower artist, Pierre-Joseph Redoute. Offered were 100 of the 468 paintings for Les Liliacees, a great work he produced while under the employ of the Empress Josephine (Mrs. Napoleon). Redoute's skills earned him the reputation of the "Raphael of flowers." His precision accuracy made these drawings both great scientific and artistic masterpieces. The complete collection of 468 watercolors was purchased by a syndicate for the then astronomical price of $5.5 million in 1985, $11,752 each. Today's group was offered at $38,000 per share, a share entitling the owner to two watercolors. Arader pledged to buy back any shares returned to them in ten years for $75,000, their guarantee of the investment value of these beautiful works.

If Redoute was the "Raphael of flowers," Pierre Antoine Poiteau could fairly be called the "Redoute of citrus." Poiteau was a student of Redoute and learned his techniques well. From 1818-1822 he published Histoire Naturelle des Orangers, containing 109 hand-colored stipple engravings of oranges, lemons and grapefruit. His drawings display the accuracy for which his teacher is famous. The San Francisco gallery offers plates from this spectacular work.

The Denver gallery is focused on animals, and specifically, some of the most graceful and beautiful of species - the butterfly. They present prints of butterflies from several early illustrated works. There is Albert Seba's Locupletissimi Rerum Naturalium Thesauri, published from 1734-1755. Seba was a man who became wealthy working for the Dutch East India Company, and used his wealth to travel the world and collect specimens of butterflies and other small animals. Benjamin Wilkes provided an artistic look at butterflies in 1773 in From English Moths and Butterflies Representing Their Change into Caterpillar, Chrysalis and Fly States... For a look at some American butterflies, there is John Abbott and Sir James Smith's The Natural History of the Rare Lepidopterous Insects of Georgia, published in 1797. For those who prefer to collect their butterflies without having to capture and pin up the poor beasts, this is a much nicer way to build a collection.

The San Francisco gallery has a collection of Edward Howard Suydam's original pencil drawings. Suydam was a painter and illustrator, with his illustrations appearing in both books and periodicals such as Harper's. In the 1930s, he drew many scenes of San Francisco as a means of encouraging Easterners to visit. This group of pencil drawings was created for the book San Francisco, A Pageant, stories of the city in the 1930s written by Charles Dobie. The book was published in 1943.