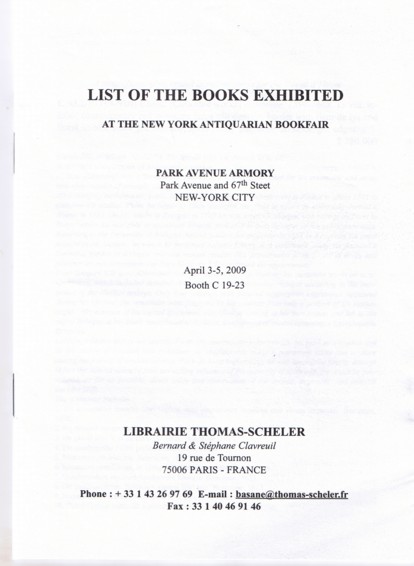 Librairie Thomas-Scheler printed a List of the Books Exhibited at the New York Antiquarian Bookfair. The French bookseller made the long journey to New York last month bringing along some very special and valuable books for display. For those not able to attend, here are a few of the books that made the journey.

Visitors from France would have seen a very different America had they come here in 1835 instead of 2009. Of course that is no longer possible, but a look at that more rural and primitive America can still be found in American Scenery or Land, Lake and River illustrations of Transatlantic Nature. This two-volume set by William Henry Bartlett and Nataniel Willis was published in 1839-1840. Bartlett was a British artist and engraver who traveled to America in 1835 and began drawing the local sights. There are three from the city of New York, a couple of Boston, the Erie Canal, Lake Ontario, the Hudson River and Hudson valley, and six from Niagara Falls and vicinity. While the cities would be barely recognizable, the Falls, excepting the shoreline, would not have changed that much since Bartlett's day. Altogether, there are 119 plates, colored by a contemporary hand, one map, and text provided by Mr. Willis. Item 6. Priced at $10,000.

Of course, the America Bartlett saw was highly civilized and modern compared to the America visited by Francis Drake. Drake did not see a lot of North America. His primary mission was to harass Spanish shipping, or to put it more bluntly, plunder the treasures they found. However, after running the coasts of South America, Drake rested in a still unknown bay north of New Spain, which would put it in today's United States, most likely somewhere in California. He returned to Britain in 1580, the first Englishman to circumnavigate the globe. Item 12 is Le Voyage de l'Illustre seigneur et chavalier francois Drach... a 1613 French translation of an account put together by Hakluyt in 1589. $28,000.

Even before Drake visited California, the French were attempting to set up a colony in Florida. Ultimately it failed, for various reasons, but the account is one of the most important works of very early Americana. Rene Laudonniere was commissioned by Charles IX to build a Huguenot settlement in Florida in 1564. Along with skilled workmen, he carried a group of young gentleman who paid their own way to come along. They established friendly relations with the natives and built a fort (Fort Caroline along the banks of the River Mai, now St. John's River). However, the group was not well suited for living in the wilderness. The young gentlemen rebelled at the type of work demanded. Some settlers stole the boats and left. Then, the natives decided to stop providing the settlers with provisions, threatening them with famine. A French ship arrived and informed Laudonniere that France believed he had been disloyal and stripped him of his governorship of Florida. He decided it was time to return home to defend himself, but then the Spanish arrived and proceeded to slaughter every settler unable to escape to the woods and hide. Laudonniere eventually made his way back to France, where he was coldly received, spending the remainder of his life in retirement. His account of this pioneering North American settlement, long before Plymouth and Jamestown, is titled L'Histoire notable de la Floride... and was published in 1586. Item 19. $150,000.

The novel Giphantie, by Charles-Francois Tiphaigne de la Roche, is noted for its uncanny prediction of photography. A utopian novel published in 1760, long before even the vaguest of direct images were created, it speaks of a process whereby images strike a surface like a mirror, but instead of being reflected, they are captured. Light strikes a special type of treated canvas, which retains the image. "This impression of the image is instantaneous. The canvas is then removed and deposited in a dark place. An hour later the impression is dry, and you have a picture the more precious in that no art can imitate its truthfulness." Item 29. $2,800.