Photography from McLean Arts and Books 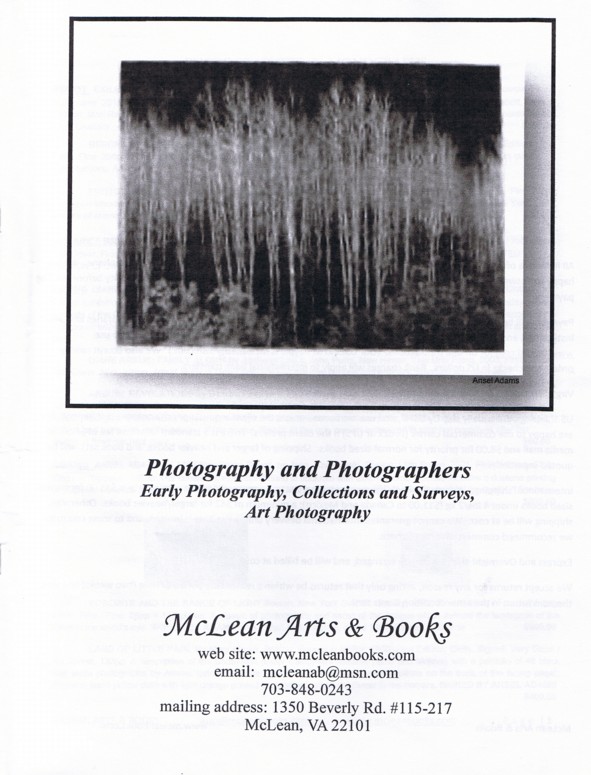 Photography from McLean Arts and Books.

McLean Arts and Books has issued a catalogue of Photography and Photographers, subtitled Early Photography, Collections and Surveys, Art Photography. This is a collection of books of and about photography, rather than a selection of individual photographs. You will find collections of many of the greatest shots from a camera, from Ansel Adams to 19th century amateur (in a time, McLean notes, before there were true professionals) John Muir Woods. Here are a few of these works of photography.

The aforementioned Adams was perhaps the greatest photographer of the American West. John Szarkowski put together this centennial birthday salute to Adams in 2001 (a year early): Ansel Adams at 100. Adams wasn't around to enjoy it, but you are. It includes his photograph of Aspens at Dawn, seen on the cover of this catalogue. Priced at $300.

One of Adams most noted sets of photographs appeared in the 1950 edition of Mary Austin's Land of Little Rain. Austin had originally published this book about the desert Southwest at the turn of the century, but Adams made her words shine with his lens. This copy is signed by Adams. $400.

Inge Morath provides 89 portraits of well-known people in the aptly named Portraits. Published in 1986, this book contains photographs taken over many decades. Pictured are authors such as Jean Cocteau, Alfred Kazin, Octavio Paz and Arthur Miller, movie stars including Marilyn Monroe, Dustin Hoffman and George C. Scott, political figures including Eleanor Roosevelt and Adlai Stevenson, and many others. The book includes an introduction from Arthur Miller. The Miller-Monroe connection is particularly interesting. At the time Morath photographed Miss Monroe, she and Miller were married and working together on the filming of The Misfits. However, they divorced the following year, and a year after that, Miller married none other than photographer Morath. Unlike his tumultuous five-year marriage to Monroe, his marriage to Morath lasted for forty years, until she died. This copy of her book is inscribed by Morath and signed by Miller. $320.

There was a time when the gritty industrial town of Liverpool, England, was just about the center of the universe. Here is a look back at that time: Mike McCartney's Liverpool Life: Sixties Black and Whites. The book contains McCartney's photographs of working class life in Liverpool. But wait, that McCartney name, and 60s Liverpool, sounds familiar... Indeed, photographer McCartney is the brother of that other Liverpool McCartney, Paul. $175.

Here is a Lincoln photo book published for Abe's 175th birthday, but perhaps even more appropriate now as we celebrate his 200th. The book is Lincoln, by George Tice, published in 1984. However, this is not a book of photographs of the great President, but of tributes to him. Abe has been memorialized in just about everything, and Tice's photographs take a humorous look at how we have "honored," or commercially appropriated, him. So, photographs include those of the Lincoln Motel, Abe's Disco, and the Lincoln Continental automobile. $100.

You may reach McLean Arts and Books at 703-848-0243 or mcleanab@msn.com. Their website is www.mcleanbooks.com.