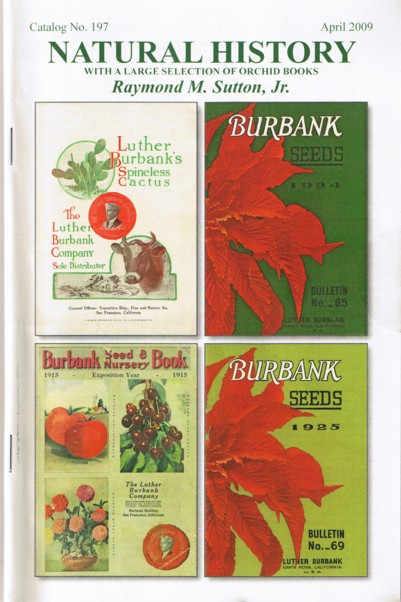 Raymond M. Sutton, Jr., has issued his Catalog No. 197 of Natural History with a Large Selection of Orchid Books. Actually, there is a large selection of all types of natural history books here - 440 in all. Plants, animals, fossils, and surveying explorations fill the pages of this catalogue with primarily antiquarian works, including many with illustrative plates. If natural history is your specialty, you will definitely appreciate this collection. Here are a few samples.

We will start with the unnumbered first item in the catalogue, an item too large to describe in detail. That is because it is a collection of 59 items, including one consisting of 100 hand-colored lanternslides. This is a collection of books, ephemera and artifacts from and about Luther Burbank. Burbank was an important horticulturist of the late 19th and early 20th century. He developed hundreds of plant varieties over his career. The most notable is probably the Russet Potato, or Burbank Russet (or Russet Burbank). This is the potato commonly associated with Idaho, and chances are it is Burbank's potato you are consuming when you order fries with that. Many of these items would have once been in his collection, though obviously the Address at the Grave of Luther Burbank by Judge Ben Lindsey and a biography 20 years after he died were never possessed by him. Otherwise, these items were mostly written or created during Burbank's lifetime, which concluded in 1927. The entire collection is offered for $9,500.

Item 13 is a very rare and desirable piece of American natural history: Ichthyology of South Carolina by John Edwards Holbrook. This is a second edition, published in Charleston in 1860, but that is not a shortcoming. It is far superior to the 1857 first edition, so much so that Holbrook agreed to exchange the new one for copies of the old so his previous customers would not be slighted. This edition came with 28 hand-colored plates of fish that lived in South Carolina's waters, but this copy also has plates numbered 29 and 30. This is likely explained by the fact that while this book is labeled "volume 1," there were no further volumes. These last two plates were probably intended for volume 2. The time and place of publication explains why the intended second volume was never completed. This was published in South Carolina in 1860, on the eve of the Civil War. Holbrook, though now in his late 60s, was called on to provide medical help during the war, and by its end, he was over 70 and most of his notes and other work had been destroyed. It was too late for him to begin anew. $22,000.

Early editions of John James Audubon's great works are financially out of the reach of most collectors, so here is a most enjoyable substitute for the rest of us. Item 180 is The Complete Audubon, which provides a precise replica of the first octavo editions of his Birds of America (1840-44) and Quadrupeds of North America (1851-54). This five-volume set was published for the National Audubon Society in 1979, in celebration of their 75th anniversary. It contains the exact same color plates - 655 in all - and text as the original editions. $200.