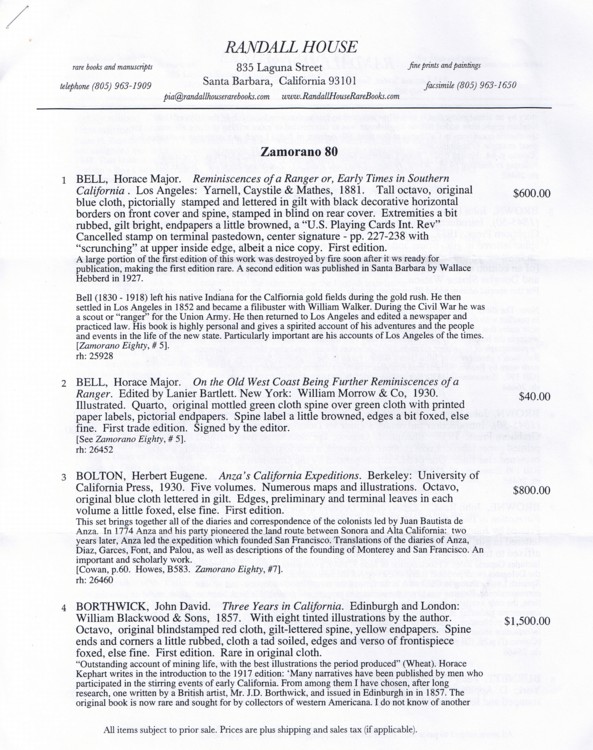 Randall House Rare Books has issued a list entitled Zamorano 80. This is the ultimate collecting list of California. In 1945, the Zamorano Club set about compiling a list of the eighty most essential pieces for a collection of Californiana. These are not the rarest of California books, nor even always the most significant. However, it is what the club members, with undoubtedly much healthy debate, chose as the most essential pieces for a collection. While some surely still argue whether these are the exact eighty which should have been selected, their choices have become almost a biblical command. The Zamorano 80 is the collecting list of Californiana. Few have ever completed a collection, for while many titles are actually quite common, a few are exceedingly rare. Still, it is the chase that provides the greatest excitement, and one can only wonder how many partly completed collections are out there.

Randall House does not have all Zamorano titles available. That can quickly be deduced from the fact that the total number offered is 37. Besides, there are some duplicates here. They have not limited the listings to first editions, an opportunity for those looking to compile a collection without the enormous difficulty and expense of obtaining a first edition "Yellow Bird" (a copy last sold at auction in 2003 for $86,250). However, there are many first editions offered. Here are a few of the opportunities to develop your Zamorano collection.

Item 7 is the Report of the Debates in the Convention of California on the Formation of the State Constitution in September and October, 1849. This was a time of dramatic and rapid change for what had long been a lightly populated backwater. An unsuccessful brief revolt by American settlers was quickly followed with a seizure of the territory by American forces after the outbreak of the Mexican War. By 1848, Mexico withdrew its claims to California with the treaty ending the war. Meanwhile, gold was discovered in the land, and by 1849, California was awash with 49ers seeking their fortune. This was the backdrop to the constitutional convention, which would set up the laws for the territory. A year later, California was admitted to the Union as the 31st state. Offered is a first edition of the report, published in 1850. $200.

Item 26 is the rare first edition of the History of the Donner Party. A Tragedy of the Sierras. As most are aware, that was the terrible journey west where the party got stuck in the Sierras during winter, and the survivors were forced to resort to cannibalism to survive. Thirty years after the tragedy, Charles McGlashan, editor of the closest newspaper in the area at Truckee, set about to find the true story of what happened. He interviewed 24 of the 26 survivors still around to complete his account. Published in 1879. $6,500.

Here is the story of a man who truly got to see America, from its spacious skies and amber grain, to its purple mountains and fruited plains, from sea to shining sea. Item 29 is Stephen Powers' Afoot and Alone, a Walk from Sea to Sea by the Southern Route. Powers walked across America alone, probably the first to do so. He started in Raleigh, North Carolina, and walked 3,556 miles to California. His description of California Indians is particularly notable, his notes later being published by the U.S. Department of the Interior. Published in 1872. $450.

Item 30 is one of the best looks at California just before, and during the early days of the Gold Rush. The book is A Tour of Duty in California; Including a Description of the Gold Region... The author is Joseph Warren Revere, grandson of midnight rider Paul Revere. The younger Revere had served in the Navy during the Mexican War, which took him to California. He wrote about the territory in this book, published in 1849, and even settled for a while in California, though he eventually returned east. $1,500.