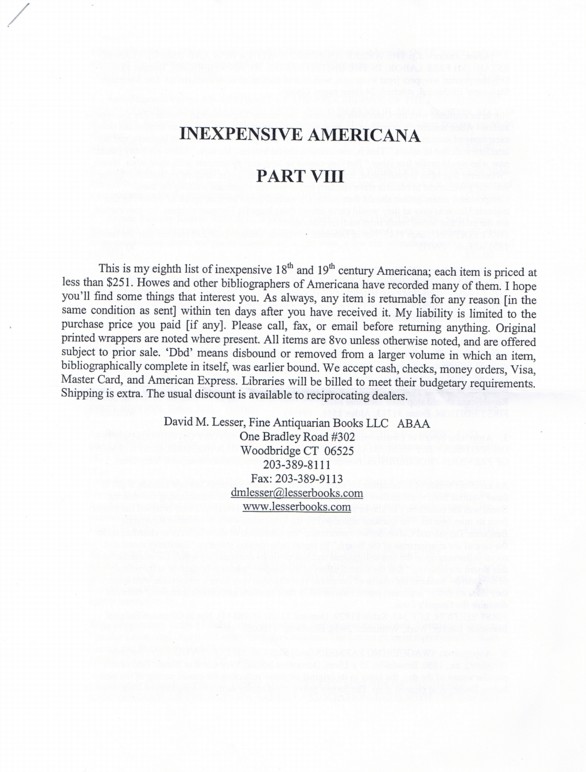 David M. Lesser Fine Antiquarian Books has issued their latest budget collection: Inexpensive Americana Part VIII. In keeping with the tough times, Lesser has issued a series of lists of printed Americana with everything priced at $250 or less. These may not be the best of times for selling books, but it is an excellent opportunity to buy. Lesser's specialty is pamphlets and ephemeral printings from the late 18th and 19th centuries, though there are always a few items that exceed these borders of type and time. Here are some items available this month for those with limited budgets and those who just prefer not spending a lot of money.

Pro-temperance forces fought to prohibit the consumption of alcohol for a century before achieving their ill-fated success. In 1838, Massachusetts passed a novel attempt to bring about prohibition. It was called the "Fifteen Gallon Law," and it prohibited innkeepers and tavern owners from selling liquor in quantities less than 15 gallons. Unless you were very good at holding your liquor, this was far too much for anyone to consume at one setting, in effect preventing customers from buying any of the stuff. Item 64 is Investigation into the Fifteen Gallon Law of Massachusetts... by Franklin Dexter and Benjamin Franklin Hallett. These two lawyers sought repeal of the law they labeled, "an experiment upon popular forbearance, to test how far fanaticism and bigotry can go in getting the sanctions of law in this State to enforce particular creeds..." Massachusetts' tavern owners and drinking public won the day. The experiment in "fanaticism" was repealed the following year. $150.

Item 4 is a very early English printing of the song we know today as "Oh! Susannah." This is an 1850 broadside, containing Stephen Foster's song just two years after he penned it. The original words are not entirely as we know today. Foster wrote for minstrel shows, and the original lyrics employed exaggerated dialect and racially insensitive, to put it mildly, words. Foster would later tone down his lyrics, as, despite the southern themes of his music, he was a northerner sympathetic to the slaves. The broadsheet is headed Swaggering Farmers and Susannah Don't You Cry. The other, forgotten song makes fun of farmers who try to live beyond their means. $175.

Some parts of the South may have been ready to move on after the Civil War, but not South Carolina, the instigator. Item 174 is Reports and Resolutions of the General Assembly of the State of South Carolina, Passed at the Annual Session of 1865. This post-war assembly seemed intent on passing codes that would have the practical effect of returning the freed slaves to bondage. A "Master-Apprentice" system was established which required blacks to sign annual master-servant contracts which demanded they work from sunrise to sundown, not leave the plantation, or invite guests to it. Penalties were applied to those who were paupers or vagrants. Effectively, the freed slaves were to be forced to live under conditions virtually the same as slavery. $250.

Item 209 is the Address of S. Teackle Wallis...at the Unveiling of the Statue of Chief Justice Taney. December 10th, 1872. Wallis would have appreciated Taney, author of the notorious Dred Scott Decision that declared blacks as less than humans, as he was a Maryland legislator with southern sympathies imprisoned by Lincoln during the war. With great hyperbole, Wallis "...commemorates a life, than which few greater, and none loftier or purer, shall dignify the annals of our country." Then, apparently oblivious to the irony, Wallis describes "...the free institutions of which Taney was the worshipper and champion..." $125.

A great comeback is always worth the price, particularly if it is only $50. Item 17 is Henry Ward Beecher's Fraternity Edition...Mr. Beecher's...Reply to Certain Criticisms Made Upon Him for So Doing; Including His Opinion of Total Depravity. Total Depravity is a doctrine that says man is unable to reach beyond his own self-interest, incapable of loving God without His grace. Or something like that. I'm not a theologian. Evidently, Beecher was accused of holding to this doctrine, which he denied. Writes Beecher, "We heartily hate the phrase, and never feel inclined to use it, except when reading the ethics of The New York Observer, or the religious editorials of The Puritan Recorder." Touché. $50.