Broadsides and Broadsheets from the William Reese Company 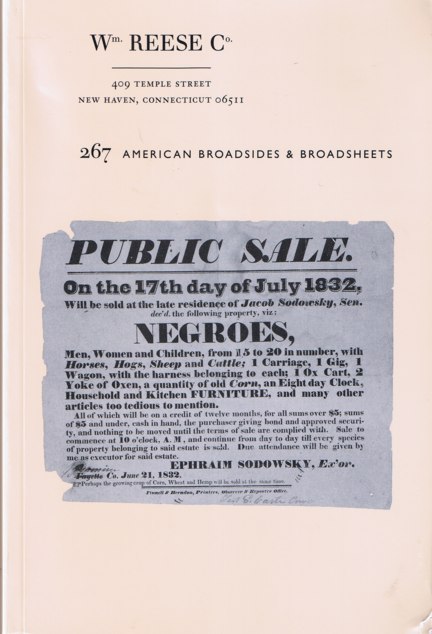 Broadsides and Broadsheets from the William Reese Company

The William Reese Company has issued one of its occasional catalogues of American Broadsides and Broadsheets. These are single sheets, broadsides being printed on only one side, broadsheets on both, and were generally either posted or handed out. In the days when newspapers were fewer and not too widely read, much of the news of the day was disseminated through these sheets. Naturally, they were also widely used for advertising, a use still common today. William Reese has collected just under 100 special broad sides and sheets for this catalogue of early Americana.

The estate sale notice on the cover of the catalogue would not seem so unusual were not human beings one of the items offered for sale. The broadside announces a PUBLIC SALE On the 17th day of July 1832, Will be sold at the late residence of Jacob Sodowsky, Sen. dec'd. the following property, viz: NEGROES, Men, Women and Children, from 15 to 20 in number, with Horses, Hogs, Sheep and Cattle... Jacob Sodowsky was an early settler of Kentucky, a respected farmer who reportedly was one of the first white men to traverse the Ohio and Mississippi Rivers all the way to New Orleans in a canoe. He was escaping from hostile Indians. There is a theory that Sandusky, Ohio, was named (or misnamed) for Sodowsky, but that is unlikely. The executor for the sale was Jacob's son, Ephraim Sodowsky, who continued to live in the house and till the land for the remaining 20 years of his life. Item 82. Priced at $5,000.

Unfriendly Indians weren't the only dangers to be faced along the banks of the Ohio in the Kentucky wilderness. Item 41 is an account of A Monstrous Serpent. Discovered and Killed in January, 1815, Near the Banks of the Ohio, in Kentucky... A group of soldiers discovered this 22-foot long serpent, as thick as the largest man's thigh. The soldiers did battle with the monster, and while one of their dogs gave his life in the fight, they finally managed to subdue the serpent and chop off his head. The skin was sent to a museum in Philadelphia, which evidently used this broadside as a promotion. A drawing of the creature adorns the notice. $11,000.

Item 4 is a 1776 broadside from Hopestill Capen, a conscientious loyalist in Revolutionary America. Capen was not a particular supporter of the British cause. His issue was his religious beliefs. As a member of the Sandemanian Presbyterian sect, he believed the Bible commanded him to be loyal to the government in power. As he explains, if the colonists are successful in changing the government, he will support the new one with "chearfulness," but until such time as there is a change, he is duty-bound to support the British. Most Sandemanians skipped the country, for despite the reasonableness of Capen's arguments, he was forced to write his appeal from prison in Boston. Capen eventually left the country, but later returned and operated a shop until his death in 1807 in the building that currently houses Boston's famed Union Oyster House. $20,000.