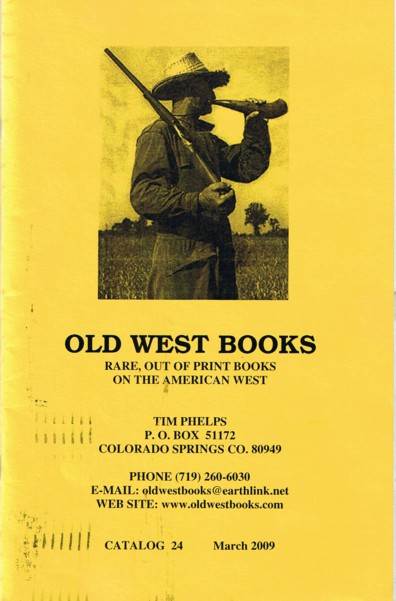 Old West Books of Colorado Springs has issued Catalog 24 of Rare, Out of Print Books on the American West. If the name, but not the location sounds familiar, this is the same Old West Books previously located in Arlington, Texas. This move is appropriate, as Colorado Springs is farther west, and Arlington, in the middle of the Dallas-Fort Worth Metroplex, is definitely New West. From their door, Old West can undoubtedly see Pike's Peak, gateway to America's first southwestern exploration, and a perfect starting point for the items inside this catalogue.

Zebulon Pike made it to Colorado Springs two centuries ahead of Old West Books, which is why the nearby mountain was named "Pike's Peak." After an unsuccessful attempt to find the source of the Mississippi, Zebulon Pike turned west. His explorations, though not as thorough or well-planned, were something of a Southwestern equivalent of Lewis and Clark's journey into the Northwest. He discovered the peak which bears his name, along with much else about the territory, but ended up being imprisoned for a while by the Spanish. At the time, today's Colorado was a border state with Mexico, and Pike journeyed a bit too far south for the always suspicious Spanish to tolerate. Item 158 is Pike's Exploratory Travels Through the Western Territories of North America... This is the 1811 London edition, generated from a manuscript prior to the release of the American edition. As a result, the arrangement of this edition differs from the American, and numerous corrections in grammar have been made. Item 158. Priced at $6,750.

Billy the Kid is one of those legendary names from the Old West, a man loyal to his friends and most adept with a gun. The Kid worked a few ranch hand types of jobs and later shifted to the business of small-time cattle rustler. However, it would be in New Mexico's Lincoln County War that he would make a name. When a friend and ally was gunned down in cold blood, Billy sought revenge. Something between 4 and 21 men (probably closer to the low end) died on the other side of Billy's gun before Sheriff Pat Garrett shot down the supposedly personable and loyal gunslinger. Still, Billy never gained that much notoriety during his lifetime, his legend, with some help from Garrett, being built after he died. The legendary status was sealed by the ultimate recognition in the years ahead - claims that he was still alive. Like Jesse James and Butch Cassidy, people showed up many years later claiming to be an aged Billy. One such man was Brushy Bill Roberts of Hico, Texas. Toward the end of his life, Roberts "admitted" to being the Kid, saying that he wanted an official pardon from the Governor of New Mexico. His story is recounted by C.L. Sonnichsen and William V. Morrison (the latter extensively interviewed Roberts) in Alias Billy the Kid. I Wanted to Die a Free Man, published in 1955. Roberts died in 1950, a year after he was discovered, and almost 70 years after Billy was believed to have died. Roberts evidently had much in common with Billy, including knowledge of very obscure events and scars on his body. Some who knew Billy many years earlier also identified him as the same. However, there were also some serious discrepancies, including Billy's literacy and fluency in Spanish, which Roberts lacked, and the fact that Billy would not likely consent to disappear, nor would Garrett likely risk the embarrassment of being discovered a fraud if he claimed to have killed Billy, only to have the latter reappear. You decide. Item 117. $40.