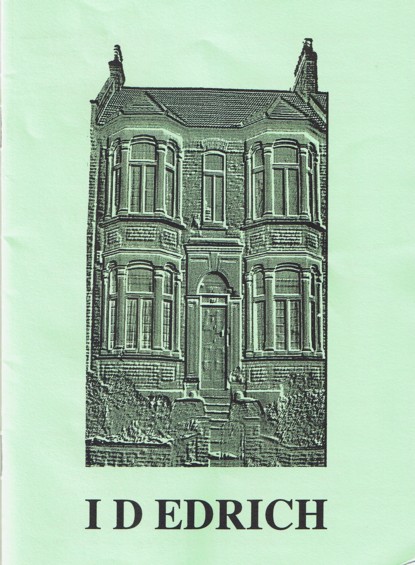 I.D. Edrich of the U.K. has followed up with its catalogues from various rooms with The "Study" Catalogue of Mainly Modern Firsts. As they explain, these are books housed in their so-called "study" (the last Edrich catalogue featured items from the "Bridge" room). Since I cannot ascertain why books are housed in one room versus another, we will content ourselves with their description that most of the books in this catalogue are "first English editions." Of course, "first English" can be tricky, as it could mean first edition published in the English language, or first edition published in England. In perusing the over 600 items being offered, I would say there are some of each, but that the overwhelming majority qualify under both definitions of "first English." So, let's take a look inside for some samples of what is available.

Here is a book that definitely qualifies as first English only in the sense of the first edition published in the U.K. It is Henry David Thoreau's tale of rural solitude concisely titled Walden. First published in the U.S. in 1854, it took until 1886 for a British edition to make its way to the shelves. By that time, Thoreau was long gone, and Walden Pond was on its way to becoming part of the Boston suburbs. Offered is the rare first printing of this British edition. Item 479. Priced at £365 (British pounds, or approximately $540 U.S. dollars).

For those who collect, if not live in an Orwellian universe, Edrich has first editions of George Orwell's two most familiar works. Item 44 is a copy of Animal Farm, published in 1945. It starts out as a utopian farm when the animals overthrow their human masters, but this socialist ideal world falls apart as the animals' "human" nature takes over. £1,500 (US $2,220). Item 45 is a first of Nineteen Eighty-Four, a then future world (the book was published in 1949) when a supposedly beneficent totalitarian regime exerts total control over its people. £900 (US $1,331).

Item 326 is a tale of farm life in the late 19th century: The Story of an African Farm. This, too, is a fictional farm, but a little more believable as the main characters are humans. Olive Schreiner grew up on farms in South Africa, and she uses her experience to introduce feminist concerns long before that was popular. However, in a bow to the times, her book was published pseudonymously under the name "Ralph Iron." The book was finally made into a film a few years ago, but that movie, like the book, is a bit obscure. Offered is a first edition from 1883 of a book considered quite rare. Item 326. £1,200 (US $1,775).

Item 24 is a look at the United States in 1833 by Prince Achille Murat. Murat was a Crown Prince of Naples, nephew of Napoleon, who had been exiled from his kingdom. He settled in Florida, where he lived out his life, publishing his letters home in the form of a book: A Moral and Political Sketch of the United States of America in 1833. He provides a look at the country at the time, but perhaps his most notable opinion was his defense of southern slavery. This was a great exception for visitors from Europe where slavery was already outlawed. Murat makes an argument that society should hold up relationships, such as he sees slavery, that are good for it, though acknowledging that the slave is not obligated to recognize the relationship. In other words, rebel if you will, but don't expect any help, or any moral approbation to be directed toward your master. Besides which, he claims, the power and luxury, including freedom to spend time appreciating the arts, rather than working the fields, makes "...the southern planter one of the most perfect models of the human race." £785 (US $1,161).

Item 334 is an interesting title: The History of Corporal Punishment. This book is described as, "A survey of flagellation in its historical, anthropological and sociological aspects." I might feel better about the serious educational purposes of author G.R. Scott were there not other books written by him offered in this catalogue with the titles Phallic Worship and The Sex Life of Man and Woman. Offered is a second edition published in 1938. £35 (US $52).