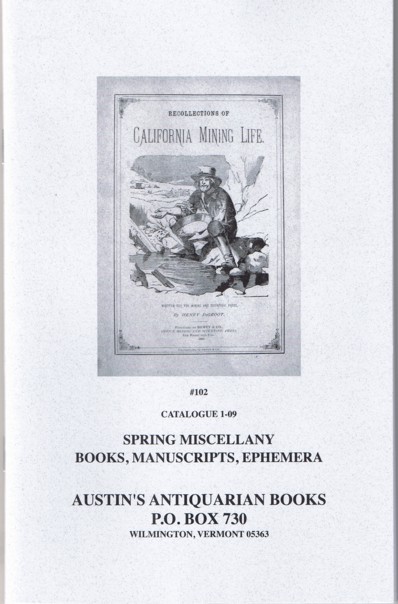 We have received our first catalogue from Austin's Antiquarian Books of Wilmington, Vermont: Spring Miscellany. Books, Manuscripts, Ephemera. It is, as it says, a "miscellany," meaning the catalogue is hard to describe. It may not have everything, but it does have many things. Certainly most meet the expectations of the bookseller's middle name - antiquarian - and there is a slight leaning toward titles from their native New England. However, there are works from all across America, and a fair number of books from overseas. So, we will describe a few of the works we found with the caution that these are not necessarily representative of the wide array of subjects available in this catalogue.

You undoubtedly know that Ferdinand Magellan was the first to circumnavigate the globe (actually, Magellan died before the journey completed, but his surviving crew completed the circle). However, do you know who was first to circumnavigate the world alone? The answer is Canadian-born seaman Joshua Slocum, who completed the journey in a little over three years from 1895-1898. Slocum was a man born for the sea. He probably spent more of his life on a boat than on land. For years, he, his wife, and several children lived on a boat, traversing the world, making money hauling cargo. After his first wife died, he remarried, but wife number two quickly grew tired of life at sea. By 1895, the rest of his family was busy with other things and Slocum set out on his historic journey. At the time it made him famous, and his account is considered by many to be one of the great travel adventures. After his circumnavigation, he attempted to settle down, but it didn't work, and he was back at sea. In 1909, heading for adventures in South America, Slocum and his boat were lost at sea. Item 113 is his book: Sailing Alone Around the World, published in 1905. It is inscribed, "Yours very truly Joshua Slocum on the Spray Cottage City Aug 15th, 1906." Cottage City, renamed Oak Bluffs in 1907, is located on Martha's Vineyard, Slocum's last home on land. The "Spray" was the boat in which he sailed around the world, and also the one on which he was lost at sea. Priced at $425.

Item 38 is a typed, signed letter from Thomas Edison, dated July 25, 1908. It was written to Theodore H. Miller of Poughkeepsie. Miller had sent Edison some photographs of his son operating a phonograph, and Edison writes, "it gives me such gratification to hear of the pleasure the phonograph gives to others." While we cannot be certain of this, it seems very likely that this is the Theodore H. Miller who was an inventor, tinkerer, fan of Edison, and a successful businessman, Superintendent of Poughkeepsie's largest industrial firm DeLaval Separator. Miller had a young son at the time, plus a one-year-old daughter. She, Elizabeth "Lee" Miller, later Lady Penrose, would grow to be a famous Vogue fashion model. The story is she was discovered on a New York street by Conde Nast himself. Next, she moved to the other side of the camera, becoming a noted photographer, collaborating (and more) with Man Ray, and a friend of Picasso. She even appeared in a Jean Cocteau film in 1930. Perhaps her greatest triumph was her photographs during the war, and of concentration camps and other German scenes shortly after it ended. Her irrepressible style undoubtedly came from her father, an iconoclast who also dabbled in photography and sent his child's picture to Edison. $1,250.