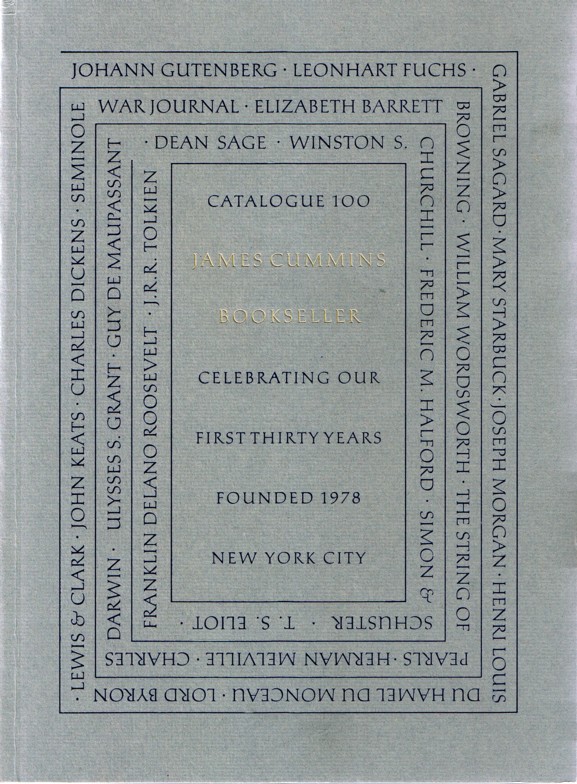 James Cummins Bookseller hits two major milestones with the issuance of his latest catalogue. This represents the century mark for Cummins - Catalogue 100. It also celebrates 30 years in business (slightly more), having founded the firm in 1978. For those who follow his catalogues, the good news is that Mr. Cummins informs us that he is good "for another 30." We have been reviewing Cummins' catalogues for the last five of those years, starting with number 86 (you can find those reviews in the archives of AE Monthly). We will try to stick around for at least a few of the next 30. By the way, while Cummins has issued 100 numbered catalogues, he has issued many without numbers, so 100 does not cover his entire output.

While this catalogue does not have a title descriptive of the contents, Cummins has always specialized in top tier books and manuscripts, and he has chosen some of the best of the best to include in the latest collection. Offered are 30 items, one for each of his years in the business, and each would be a most worthy selection if you purchased just one book this year.

Item 3 is one of the earliest looks at the interior of non-Spanish North America. It is particularly unusual as it comes from someone other than a Jesuit missionary. Gabriel Sagard -Theodat was a Recollet, participating in the first Recollet mission (1615-1629). Sagard had a hard time roughing it in the woods, lasting only from 1623-24, but he made it all the way to the land of the Huron Indians in today's Ontario, and printed the first Huron vocabulary. He also provided a "sympathetic portrayal of Huron life and an exhaustive document of Huron culture." The title of Sagard's work on this Canadian Indian confederation which would soon be decimated by European diseases and rivalries is Le Grand Voyage du Pays des Hurons, published in 1832. Priced at $35,000.

Item 9 is probably the most important travel book in American (as in United States) history: History of the Expedition under the Command of Captains Lewis and Clark... It took eight years from their return in 1806 until this first edition was finally published in 1814. The book opened the great American West, still then part of Louisiana, to the imaginations, explorations, and finally settlement by the newly independent nation. Cummins quotes the preeminent western bibliography of Wagner-Camp, which describes this book as "...the definitive account of the most important exploration of the North American continent..." This is an exceptional copy and includes the folding map. $250,000.

Item 12 is one of the earliest Dickens' letters to make its way to the market in a long time, and it is a most entertaining one at that. In January, 1831, Dickens wrote to his good friend H.W. Kolle. Dickens and Kolle were dating the Beadnell sisters at the time, and were planning an outing with their girlfriends. Dickens encourages his friend to make the arrangements for the coach, explaining that Kolle is far better than he at negotiating such an arrangement. He then goes on to poke good-natured fun of his friend who apparently had been arrested for climbing a lamppost, presumably under the influence of too much drink. "I was never more delighted in my life than to hear that you were incarcerated," writes Dickens. "My only regret is that I was not there to see the fun..." $25,000.