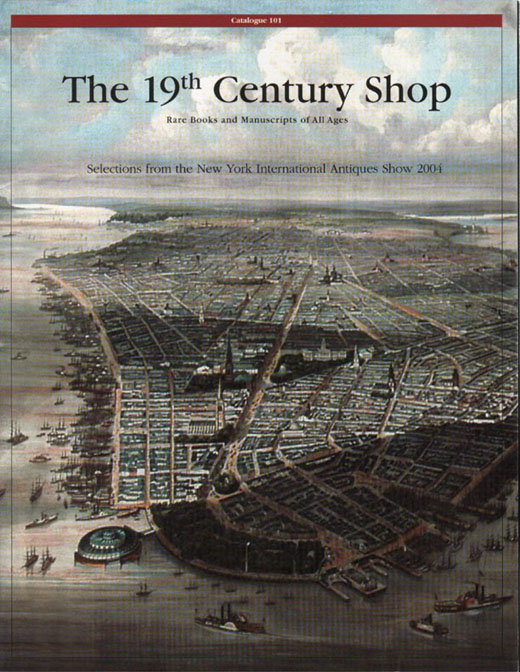 The 19th Century Shop has issued a catalogue of “Selections from the New York International Antiques Show 2004.” This catalogue includes books, maps, images, and artwork, primarily but not exclusively within the field of Americana.

For those with an interest in American history, the most striking item has to be a broadside headed “A Gang of 101 Negroes!” This is an advertisement for a slave auction, and sadly, such auctions are a not uncommon part of our past. However, what makes this one unusual is the date: December 15, 1863. The Emancipation Proclamation had gone into effect almost a year earlier, but either the folks of Macon, Georgia, had not heard or did not take it very seriously. Here were 101 legally free people, mostly grouped in families but a few to be offered singly, being put up for sale. This particular handbill also includes handwritten notations by its possessor of prices realized. Astonishingly, the families were being sold for prices in the thousands of dollars, a very substantial sum of money in those days. Evidently, the people of Macon must still have had great confidence in a Confederate victory, or figured their Confederate dollars would be worthless anyway if the South lost. It would only be another year now before General Sherman would effectively put the final nail into the “peculiar institution” in Georgia. Priced at $75,000.

There can’t be many things more American than a Washington letter. The 19th Century Shop catalogue offers one from that greatest American to his secretary Tobias Lear dated 10 July 1797. Washington discusses a trip to the upper Potomac to view a pet project, a canal to the West. The “West” in those days consisted of today’s Washington suburbs. The former President also speaks of visiting the “Federal City” to check on progress in the development of that new home of the government. Of course we now know that “Federal City” by Washington’s name. $42,000.

Spoken records were rarely big sellers before rap came along, but here’s the cover of such an album that is far more interesting than the album itself. In 1956 the Distinguished Playwright Series issued an album of Arthur Miller speaking about and reading from his works such as the Crucible and Death of a Salesman. On July 1 of that year, Miller married Norma Jean Mortenson Baker, better known as Marilyn Monroe. Miller thoughtfully signed the album cover to the Rabbi who performed the service: “For Bob Goldsberg With my [our] thanks for a beautiful wedding – July 1, 1956.” It was Marilyn who added the “our” to the notation and both signed the cover, the latter as “Mrs. Monroe Miller.” While Miller was a great writer, he was evidently not much of a speller or just plain obtuse since the Rabbi’s name was “Goldberg,” like Molly or the wrestler, not “Goldsberg.” And, while the wedding was “beautiful,” the marriage was not and ended in divorce a few years later. $22,000.