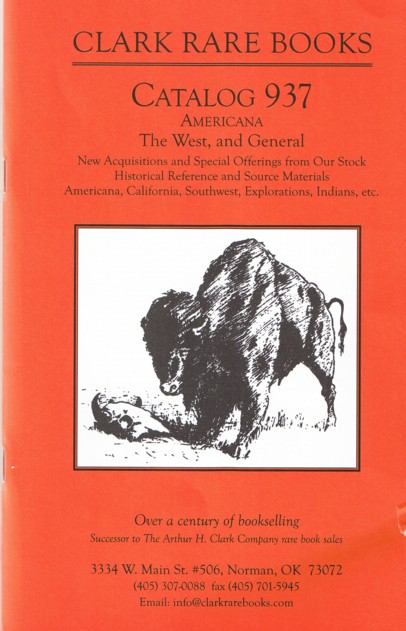 Clark Rare Books has issued Catalog 937 of Americana, The West, and General. Most books do relate to the American West, though there are always a few exceptions. Offered is a mix of books contemporary with the Old West, along with later accounts and reprints of earlier works. Clark always provides us with lots of interesting material about the land west of the Mississippi and this month is no exception. Let's take a look inside.

Item 230 is Ancient Monuments of the Mississippi Valley, by Ephraim G. Squier and Edwin H. Davis. This is an in depth look at the ancient Indian mounds found in the Midwest, little understood at the time. Squier was a newly arrived newspaper editor to Chillicothe, Ohio, who quickly took an interest in local mounds, Davis a local doctor who had inspected the mounds and collected artifacts for years. Their combined research led to this report, which is of greatest significance as being the first scientific publication of the Smithsonian. Published in 1848, it almost never came to be. While the research was well-respected, Squier and Davis became engaged in a bitter fight over credit. The hard-hitting Squier believed Davis deserved little, if any credit for the work, while the quieter Davis felt he made the greater contribution with his knowledge and collection and was insulted by Squier's attitude. The partnership was irretrievably broken, but the work did make it to print, with both names included, Squier's first. Priced at $750.

Here is another early look at ancient mounds, though a less scientific one: Traditions of De-Coo-Dah and Antiquarian Researches: Comprising Extensive Explorations, Surveys, Excavations of the Wonderful and Mysterious Earthen Remains of the Mound-Builders in America... by William Pidgeon. Pigeon was similarly fascinated by ancient mounds, and he interviewed this aged Sioux chief to learn more. What he got was stories of a highly advanced, ancient civilization, rivaling that of ancient Greece and Egypt. These were either legends, or De-Coo-Dah pulling Pigeon's leg. Clark quotes about Pigeon, "The author was animated by an eager curiosity, which unhappily was directed by no familiarity with science..." Item 141 is a first edition of this book, published in 1853. $40.

Item 47 is a copy of the July 12, 1847, Daily Missouri Republican, which includes words from an obscure Illinois congressman who would become one of the greatest, if not the greatest, leader in American history. That, naturally, would be Abraham Lincoln, who in 1847 was serving his sole term in the U.S. Congress. Lincoln was not a particularly important official at this time, but on July 6 of that year, he attended the Chicago River and Harbor Convention. This was held to discuss issues of navigation on the Mississippi. Reportedly, as many as 20,000 people from 19 states attended. The convention came about as a result of the Democratic Polk Administration opposing significant federal involvement with public works on constitutional grounds. Lincoln, as the sole Whig representative from Illinois, was called on to make some remarks. His more expansive view of federal powers undoubtedly was well received by this group which wished to encourage commerce. This newspaper carries Lincoln's brief speech to the convention, along with other news of the day. $75.