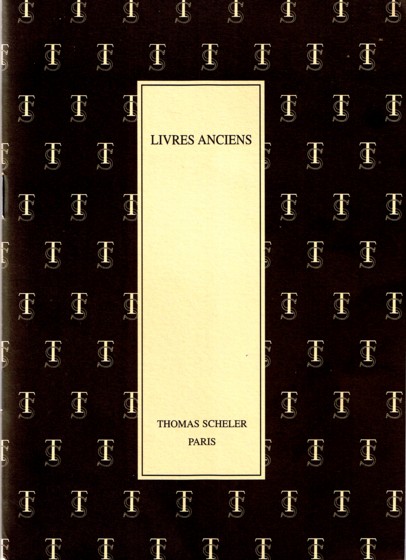 Librairie Thomas-Scheler of Paris has issued their catalogue number 37 of Livres Ancien. As the title implies, the catalogue is written in the French language. Most of the books offered are as well, though there are a few in English, German, and Latin. Additionally, there are numerous French translations of books that originated in other countries, such as the greatest biography of George Washington. All in all, this is a fine catalogue of antiquarian books, covering a range of subjects. While a few go back just a century, most are substantially older, with several 16th century works being offered. These are a few of the books available.

Item 46 is La Constitution Francaise, the French Constitution, as presented to the King on the 3rd of September 1791. King Louis XVI reluctantly agreed to cede many of his powers, not realizing that far worse was in store. This was France's first written constitution, creating a constitutional monarchy, the King having limited veto power, but most authority now belonging to the legislative assembly. Ultimately it was not enough to save the King, either politically or physically. The Constitution of 1791 fell in less than a year, and King Louis XVI lost first his job, and then his head. Priced at €3,000 (euros, or approximately $3,796 US dollars).

Item 130 is an important medical work, the first look at the diseases of a particular occupational group. Theophraste Paracelse (Theophrastus Paracelsus) grew up around mines, and he studied illnesses of miners, smelter workers, and metallurgists. His book is Von ber Bergsucht oder Bergkranckheiten drey Bucher... published in 1567. Paracelsus, a physician, was an interesting character, considered arrogant by many of his contemporaries, a practitioner of black magic by others. However, while astrology played a role in many of his "cures," Paracelse understood that his "magic" was really the result of scientific observation and reasoning. Of course, his reasoning was based on many assumptions about the world long since rejected, so not all of his medical "cures" would make much sense today. His study of miners fits well with the scientific aspect of his belief, and put him on the leading edge of a world just breaking out of the Dark Ages. €20,000 (US $25,334).

Item 64 is Essai de Geologie, ou Memoires pour servir a l'Histoire Naturelle du Globe. This is an early work on geology, published in two volumes from 1803-1809, by Barthelemy Faujas de Saint Fond, an early geology professor in Paris. The work is divided into sections on fossils and minerals. Faujas had been instrumental in making the connection between active volcanic flows and older rocks that represented ancient flows. Like virtually everyone pre-Darwin, he struggled more with explanations of fossils, which he believed to be similar to present-day animals. €4,000 (US $5,053).

Much of this doubt would be cleared up with this book: L'origine des Especes... Charles Darwin's Origin of Species. Item 53 is an 1866 second French edition of this seminal work. €300 (US $379).

Here is a work that you don't need to understand French to know what the book is about: La Prostitution. This 1882 book by Dr. G. Harris traces the origin and development of the world's oldest profession from antiquity to the time of the French Revolution. Item 80. €80 (US $101).

Item 95 is the Voyages du Captaine Robert Lade... Captain Lade traveled around the world, with perhaps his most interesting visit to historians being to the colony of Georgia, then just a decade old. However, one should not put too much weight in his description. There is no trace to be found of this Captain Robert Lade. The story is evidently a fiction of the man who "translated" it from English, Abbe Prevost. Published in 1744. €1,500 (US $1,893).