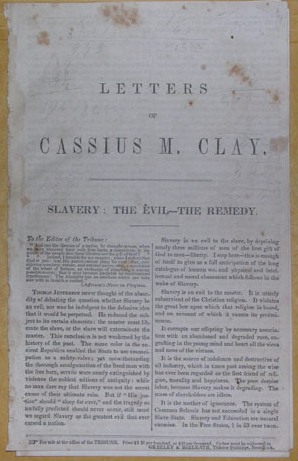 David M. Lesser’s “Catalogue 900” is a collection of rare and unusual Americana, primarily from the 19th century. This is an online catalogue, so if you are reading this review, you can view this collection with a click of your mouse. It is also the first catalogue to use FootNotes, the service that gives you access to bibliographic, auction, and bookseller records about many of the titles offered. To see Lesser’s catalogue now, just go to http://www.americanaexchange.com/collectors/newreport.asp?cid=89&R=0.

Item 34 is the Letters of Cassius M. Clay. Some might think these are letters from early in the career of perhaps the greatest boxer ever, before he changed his name to Muhammad Ali, but no, there is no correspondence with Sonny Liston here. This Cassius Marcellus Clay was born in Kentucky in 1810, and after serving a few terms in the state legislature from 1835-1840, would go on to be one of the nation’s leading opponents of slavery. These sentiments caused him to lose his last election and to have the press he built destroyed by a mob, but this did not deter him. He would be involved in the founding of the Republican Party and would develop a following in the North on account of his being a southerner with antislavery views. President Lincoln would appoint him Minister to Russia and Clay would be involved in the negotiations to purchase Alaska.

Among other notable points in Clay’s career were assassination attempts and an attack in 1849 in which he was stabbed and shot at point-blank range with a pistol that misfired. Clay is reported to have said as he lost consciousness “I died in the defense of the liberties of the people.” This may have been true but premature, as he lived another 54 years, succumbing of old age in 1903 when 93-years of age. His attacker, whom Clay chased and stabbed before losing consciousness, was not so lucky and died within a few days. In an earlier altercation, Clay was charged with mayhem in defending himself, but was acquitted with help from his second cousin, Henry Clay, the “Great Compromiser.” Cassius Clay would also serve in the armed forces, both in the Mexican War and briefly in the Civil War, was a friend and confidant of Abraham Lincoln, and was influential in the latter’s decision to issue the Emancipation Proclamation. He considered his influence on this major decision to be one of the most important achievements of his life. One more thing about Cassius Clay: he voluntarily freed his slaves in the 1840s, at least one of which adopted his name in gratitude. The name was passed down to his descendents, which explains how the famed boxer ended up with the name Cassius Clay. The first Clay’s Letters are priced at $250.