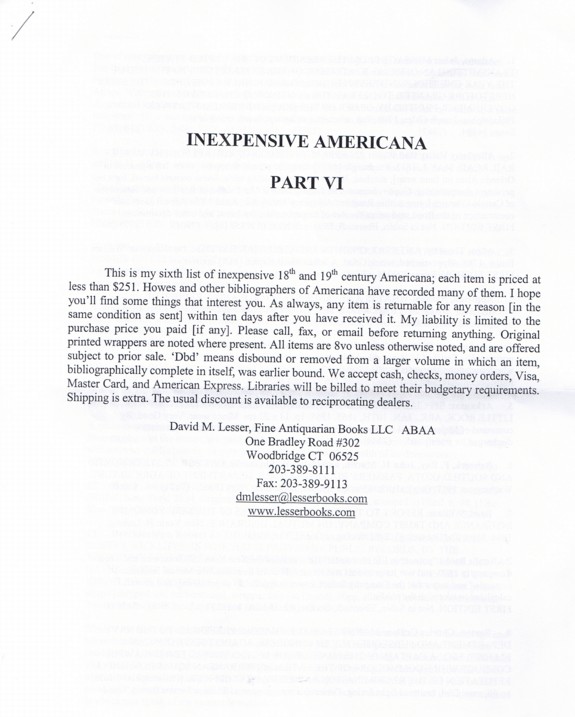 David M. Lesser Fine Antiquarian Books has issued the latest in a series: Inexpensive Americana Part VI. Everyone knows these are tough times, and not everyone can afford a Gutenberg or First Folio anymore. The time is right for a collection of affordable, yet still interesting and significant material. Okay...there are a few things here of notable obscurity, but this catalogue is still filled with familiar items, each priced at $250 or less. Let's take a look.

Jefferson Davis is most remembered as President of the Confederacy, yet as late as 1859, he was still fighting a very different, and quite aged battle. Item 51 is the Speech of Jefferson Davis on the French Spoliations Bill... This he gave in the U.S. Senate in 1859. These claims went back to the quasi-war with France between 1797 and 1801, when the French, perceiving the U.S. too friendly to its rival Britain, allowed privateers to disrupt U.S. Shipping. To the Americans, this was a violation of their neutrality, not to mention piracy. Many Americans made claims against the French, and the U.S. Government agreed to be responsible for some of them as a result of the Louisiana Purchase. However, many of these claims remained in limbo for years, and at the time of Davis' speech, that number of years was almost 60. Davis was opposed to paying the claims. However, he soon had more weighty matters on his mind. As for the claims, they went on for many more decades, long after Davis breathed his last. The final claim was not settled until 1924. Priced at $75.

An obscure California congressman, placed in charge of the Special Committee on Pacific Railroads, made an astonishing proposal in 1855. At a time when Congress was not yet ready to promote one transcontinental line, Congressman James W. Denver proposed three of them. Item 134 is Pacific Railroad and Telegraph. Mr. Denver...Gave Notice that He would Submit the Following Report... He was shot down on all three. Denver retired from Congress after a single term, spent a couple of years as Territorial Governor of Kansas, was a general during the Civil War, and moved east where he was an attorney until he died in 1892. While Denver long ago faded into obscurity, his name is familiar to all. An enterprising land developer in what was then western Kansas, but is now Colorado, named a city he was developing after Kansas' then Governor Denver. Many people live there today. $150.

Stephen A. Douglas was perhaps the most important politician of the 1850s, a master at playing both sides of an issue. He tried to tread a fine line between being pro and anti slavery while the nation was coming apart over the issue. His promotion of compromises, most notably the Kansas-Nebraska Act, based on his doctrine of Popular Sovereignty, did little to bring the two sides together. Item 56 is Speeches of Stephen A. Douglas on the Occasion of His Public Receptions by the Citizens of New Orleans, Philadelphia, and Baltimore. Given in 1859, Douglas here attempts to please pro-slavery forces by arguing that, "When the framers of the Declaration declared that all men were equal, they had no reference whatever to the negro." His "proof" is that slavery was tolerated in all of the colonies at the time, so that they would have been hypocrites if they believed equality applied to blacks. $75.