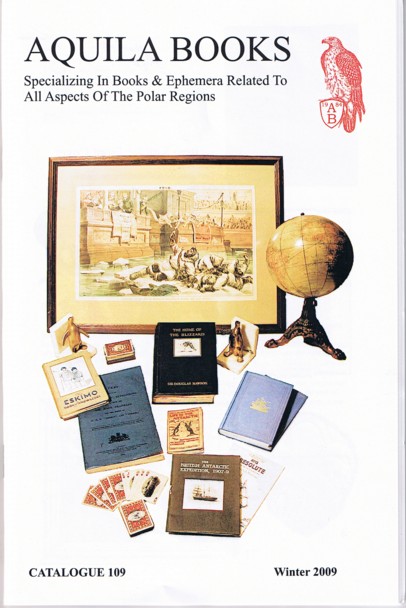 Aquila Books has offered their Catalogue 109, Winter 2009, specializing in books about places where the sun doesn't shine. Or, it shines all of the time. Take your pick. These are books about the polar regions, or at least places very close to those two ends of the earth. These are places with lots of ice and snow, endless cold weather, and truly amazing adventures. Whether it's trying to be the first to reach one of the poles, attempting to discover a Northwest Passage, or make your riches in Alaskan gold, these are adventures only for the hardiest among us. The rest of us should just read about them. Here is your opportunity.

Item 23 is Henry Ellis' account of one of the many unsuccessful attempts to discover that elusive Northwest Passage. Published in 1748, the title is A Voyage to Hudson's-Bay, by the Dobb's Galley and California, in the Years 1746 and 1747, for Discovering a Northwest Passage. In the 18th century, explorers were still hopeful of finding a route through Hudson Bay. Ellis, who worked for Arthur Dobbs, naturally failed to find such a passage, but he and Dobbs continued in a debate with Captain Middleton over its existence. Middleton, who made a similar voyage, correctly concluded there was no such route through Hudson Bay, but Dobbs and Ellis maintained hope despite their failure. Priced at $1,850.

It would take almost two more centuries before the passage was finally located, though it would hardly prove to be a practical shipping route. Roald Amundsen would lead an expedition in the first decade of the 20th century that would finally complete a route to the north of the Canadian mainland. Amundsen recounts his trip in The "North West Passage" Being the Record of a Voyage of Exploration of the Ship "Gjoa" 1903-1907... published in 1908. As the title implies, it took Amundsen four years to make it from end to end, having to winter over in the ice several times. This would not make for speedier trips to the East. Aquila tells us something I never knew about Amundsen's voyage: "...he had to leave Norway in the dead of night to avoid creditors, who wanted to seize his ship." Fortunately, his success here enabled Amundsen to mount his successful assault on the South Pole a few years later. Item 3. $1,100.

When Amundsen did set out for the South Pole, he was in a race to be the first with Robert Falcon Scott, who was leading his own expedition. Amundsen would win that race, and unlike Scott, live to tell about it. A few years before, Scott headed an earlier expedition to the Antarctic, with the more favorable outcome of his returning alive. Item 6 is Two Years in the Antarctic Being a Narrative of the British National Antarctic Expedition. This is a scarce narrative written by Scott's second-in-command, Albert Armitage, published in 1905. $2,500.