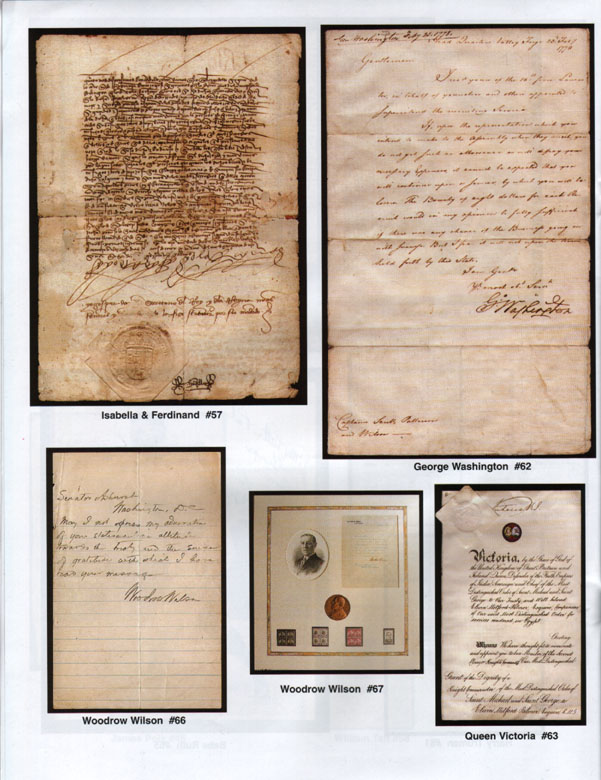 
Of course America isn’t the only place to hold elections. In 1942, in the midst of its terrible war, an election was held in Great Britain to replace a member of parliament who died in office. The coalition that Winston Churchill headed during the war had its candidate, but there was opposition. In this letter to coalition candidate Cyril Lakin, Churchill gives him his hearty endorsement while expressing his opinions on the overwhelming need to defeat the enemy. It was sufficient. Lakin carried the election, and ultimately Churchill and his allies won the war. Item 5. $39,900.

Item 4 is an unusual item. It is an 1849 bearer check for $5,000 signed by John Brown. Brown would become known as perhaps the most ardent of abolitionists, and would pay for his cause with his life after his raid on the federal arsenal at Harpers Ferry. At this time, Brown, already deeply into the battle for abolition, was closing down his failing wool brokerage business in Springfield, Massachusetts. He would move from there to a community in North Elba, New York, set up for former slaves, and from there to Kansas and eventually Harpers Ferry. The rest of his life would be devoted full time to his cause. While John Brown’s body may now be a-mouldering in the grave, his check lives on, and you can have it for a 40% discount. $2,995.

Item 36 connects one of America’s greatest presidents with one of its greatest industrialists, but the story it tells is a sad one. As Raab recounts the story, George Washington Vanderbilt was the third (youngest) and favorite son of “Commodore” Cornelius Vanderbilt. Vanderbilt senior made his fortune first in the steamboat business and later in railroads. At one time, he was the wealthiest man in America. He intended to leave the bulk of his estate intact, and George was expected to be the primary heir. Oldest son William Henry was not considered to be good at business and middle son Cornelius Jeremiah was virtually useless. George graduated from West Point in 1860 and fought in the Civil War. In 1861, Vanderbilt was promoted to 1st lieutenant, and it is this document, signed by President Lincoln, which is offered for sale. Unfortunately, wounds and illnesses destroyed young Vanderbilt’s health. He would leave the army as a captain in 1863, and die on January 1, 1864, in Nice, France, where his father had sent him in hopes of a recovery. With the death of George, eldest son William would get another chance, and would prove to be quite successful in business himself, though he is perhaps best remembered for his “the public be damned” remark. $15,900.