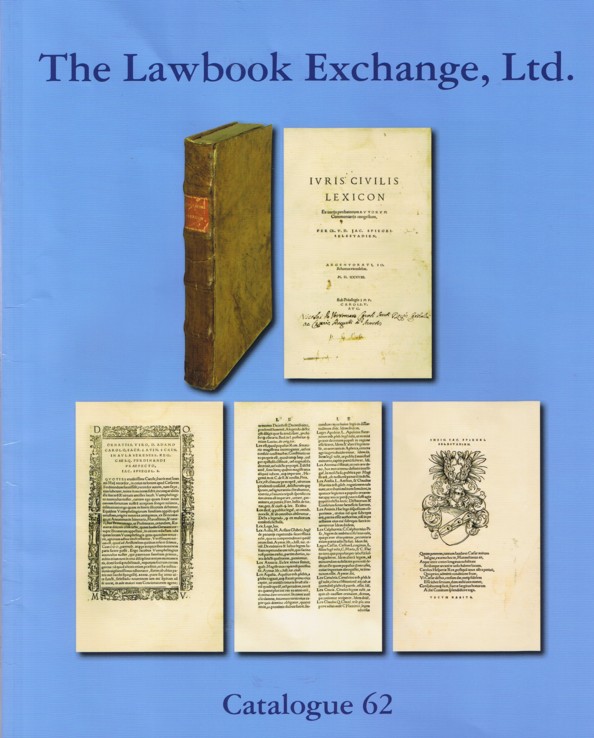 The Lawbook Exchange has issued Catalogue 62, with the lengthy title, Recently Acquired Books and Other Items from the Sixteenth through the Twentieth Centuries: American, English and Continental, Featuring a Collection of Books from the Library of Stephen Eno. For those not familiar with Eno, he was a schoolteacher in New York's Dutchess County who became a lawyer and civic leader in the early 19th century. His office was in Pine Plains, but he also served clients in the Poughkeepsie area. These are a few of the books in this latest Lawbook collection.

Item 44 is one of the most important American books of jurisprudence ever written: The Common Law, by Oliver Wendell Holmes. Published in 1881, Holmes argued that the law was not some type of unbending, mathematical formula, but a body of practices built on experience. Holmes changed legal thinking not only in America but England as well, though the debate continues to this day whether the law and U.S. Constitution is a document fixed in time or one which grows with the times. Priced at $1,500.

For those interested in constitutional law (especially those who can read French), item 107 is Constitutions des Treize Etats-Unis de l'Amerique (constitutions of the thirteen states of America). This is a first French edition of copies of the constitutions of the then 13 American states, still only loosely connected in the year of publication - 1783. Benjamin Franklin had requested the translation as something of a promotion for the new nation to his friends in Europe. This book was printed in a limited run of 600 copies, and contains over 50 footnotes written by Franklin. $2,750.

Here is another American constitution and the laws passed under it, but its history is much briefer. Item 17 is Compiled Laws of the Cherokee Nation, published in 1881. It includes the Cherokee constitution of 1839, created after the eastern Cherokees were forcibly marched to Oklahoma over the "Trail of Tears" to join the western Cherokees. The Cherokees adopted a constitution in many ways similar to that of the U.S., with notable exceptions for such things as land ownership. Later laws covered such items as the abolition of slavery and treaties with other Indian nations. The Cherokees hoped that by adopting a western style constitution, they would be able to remain an independent nation. However, the U.S. government brought an end to an independent, landed Indian nation when it ordered the Cherokee nation common lands distributed as private property to individual Cherokees, who could in turn sell the land to white settlers. $1,000.