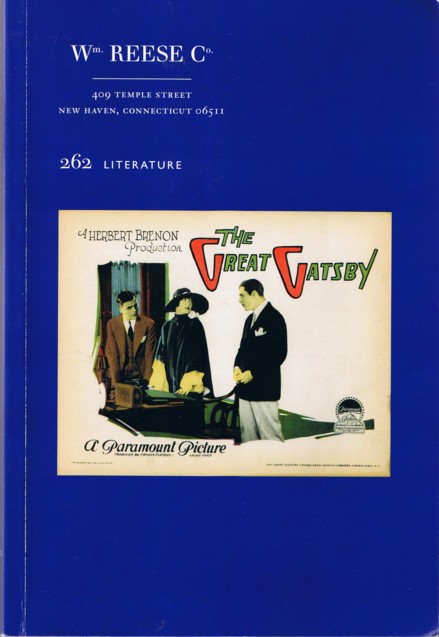 The William Reese Company has issued a catalogue of Literature. This is a substantial collection (over 900 items) of primarily moderately priced items from authors both very well known and somewhat obscure. Along with prose there are many items of poetry, and quite a few personal letters from people who wrote books as well as letters. For those who collect literature, it is hard to imagine you wouldn't find something you like in so extensive an offering. These are just a few of the many items available.

Here is an uncommon and obscure work by the very well known Charles Dickens: Is She His Wife? Or, Something Singular! A Comic Burletta in One Act. "Burletta" is not a term most people use everyday, but here it referred to a short farce, a thirty-minute play meant to be performed before the main attraction, the way they used to show cartoons and shorts before movies. Dickens originally completed this work in 1837, working under a short deadline. Dickens had burst on the scene to great popularity as a writer the previous year and there was great demand for his work. It is likely that this was essentially something unpublished he created before he became successful, then polished up to meet the newfound demand for his work. Whatever the background, only one contemporary copy of the play was known, and it was destroyed in a Boston fire in 1879. Fortunately, a second British printing was produced in 1873 (after Dickens died), which is extremely rare, and then this first American and public edition from the later destroyed copy in 1877. Item 199. $850.

Item 707 contains an unusually early poem from America's insurance man/poet Wallace Stevens. That is certainly an unusual combination, as Stevens rose high in the executive ranks of the Hartford Insurance Company even while developing his reputation as a poet. It was his successful career in insurance that caused Stevens to be such a late bloomer in poetry. It was not until he was in his mid-forties that his first book of poetry was finally published. However, almost a quarter century earlier, Stevens had a work published as part of a compilation, and it was his first poem published in book form. The collection is Harvard Lyrics and Other Verses Being Selections of the Best Verse Written by Harvard Undergraduates within the Last Ten Years, edited by Charles Stebbins. It was published in 1899 (Stevens first book, Harmonium, was published 24 years later). Outside of Stevens' Vita Mea, Reese describes this as "[a]n otherwise generic collection." Generic, but thanks to Stevens, very collectible. $675.

Item 115 is a copy of the 1927 book Ballyhoo! By Beth Brown. Reese describes this as a first edition of a "novel of sleazy carnival life by an author who never met an exclamation point she didn't like." This copy is inscribed to legendary bookman David Kirschenbaum. Kirschenbaum owned several bookstores in New York, including the Carnegie Book Shop (at one time next to Carnegie Hall) for most of the twentieth century, passing away in 1994 at the age of 99. Just $40!

Here is an unintentionally painful title: Proverbs and Paper-Cuts from China, by Edward Burnett. Few things feel worse than paper cuts, but the author is actually referring to paper cuttings, that is, paper cut by hands, not hands cut by paper. The art of cutting paper into artistic designs is very popular in China. This 1986 book comes with 14 hand-colored paper cuttings. Item 123. $125.