Books from the "Bridge" Room from I.D. Edrich 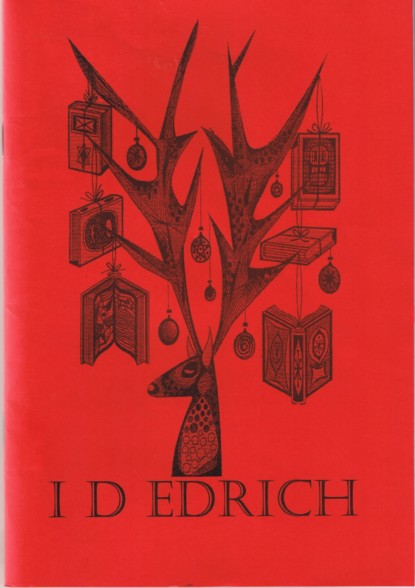 Books from the "Bridge" Room from I.D. Edrich

We recently received our first catalogue from I.D. Edrich, booksellers from London. This issue is entitled The Bridge Catalogue, the explanation being these books are housed in their "Bridge" room. However, we are a bit mystified by the description as there is no explanation as to why it is called a "bridge" room or what sort of books qualify to be placed there. There is a book in this catalogue about the card game of bridge, but since there are 504 other titles not about this game, this does not seem like a hopeful trail. We do know they specialize in literature, poetry and modern first editions, and you will find some very well known books in these categories. Additionally, there are many items with which I am not familiar, but perhaps some titles unusual to me are more familiar with British readers. So, with no further ado, we will let Edrich take us to the bridge (note: they plan to follow up this catalogue with a second one of selections from this location).

Item 107 is sort of a first British edition of Ray Bradbury's classic science fiction work The Martian Chronicles. We say "sort of" because the first English went under the title The Silver Locusts. The British version contains two stories not included in the first American edition. This edition was published in 1951, the year following the first American. This copy bears the stamp "ABC TV Script Department," evidently consulted for a televised version of the sci-fi tales. Priced at £150 (British pounds, or roughly $222 in U.S. dollars).

Here is a book both I and my children have been assigned in school, its emotional power not diminished by the vast cultural changes that have occurred between generations. Item 276 is a first edition from 1954 of William Golding's Lord of the Flies. Once again, Ralph, Piggy and the boys are back to remind us of the slender thread that is civilization, of how close we may be to returning to the law of the jungle. This is not a terribly hopeful look at human nature, but perhaps Golding better understood the seemingly incomprehensible terrorism and atrocities that seem to surround us. Even English schoolboys may have a dark side. £525 (US $779).

Item 348 was a once very popular cookbook, reprinted many times over many years, but changing tastes eventually made it's recipes a bit dated. The title is The Housekeeper's Instructor or Universal Family Cook, by William Augustus Henderson. This is a first edition, published in 1793. Sure, some people still eat rabbits, and a few undoubtedly still favor calf's foot pudding, perhaps even calf's head soup, though preparing turtle guts may have become a lost art. Indeed, Henderson assures us the guts "are considered as the best part." There is a wonderful sauce for chicken which uses, among its ingredients, cocks-combs and ox palate. Add some calf guts, red wine, truffles, artichoke bottoms and asparagus tops, and of course, the key ingredient to cover up even the most thoroughly disgusting of concoctions - catsup. There is also a scrumptious recipe for pigs' pettitoes, which is pigs' feet stuffed with a mince-meat made from the animal's heart and liver. I think you can now see why this cookbook has gone out of style, though it is never too late for you to revive some of these old delicacies. This copy contains a few handwritten remedies for ailments such as swelled face, worms, and scouring in pigs. £550 ($818).