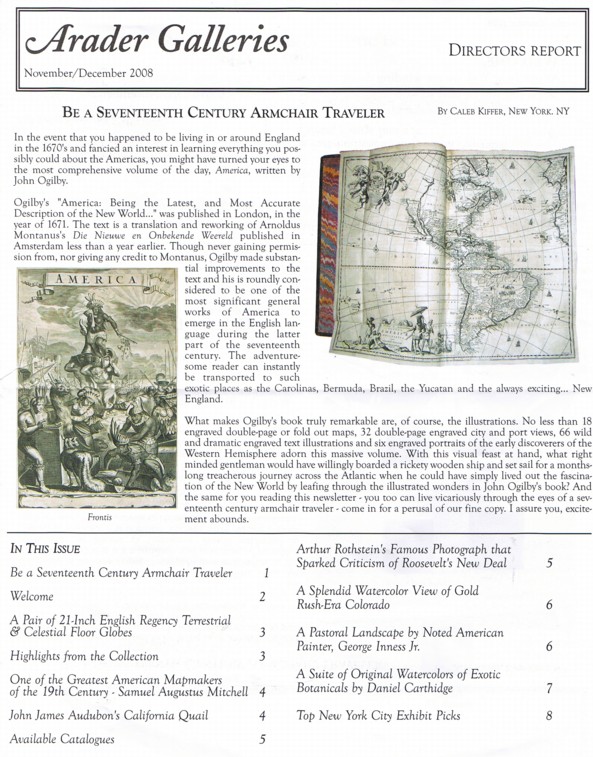 We have received the November-December 2008 edition of the Arader Galleries' Directors Report a bit on the late side, but that is all right. These aren't catalogues, but discussions of a few select items at their various galleries across the United States. They give you a sense of what you may find at one of their six locations, in Philadelphia, Denver, San Francisco, Houston, and two in New York. If this is the sort of material you find interesting, and we cannot imagine why you would not, you may want to stop by one of the galleries when in the vicinity.

The California Quail (or California Partridge according to Audubon) is one of the many American birds the great artist drew. This image is, naturally enough, featured by the San Francisco Gallery. This quail is today the state bird of California. Interestingly enough, Audubon never visited California. In fact, he never made it west of the Mississippi, though his son, who assisted him later in life, was an extensive traveler. Audubon received specimens of many of the birds he drew, this one coming from an 1836 expedition to the golden not-yet a state. Audubon still managed to picture the quail in its native habitat, though he was never there.

From fauna to flora, the San Francisco Gallery also has a collection of watercolors of exotic botanicals by Daniel Carthidge. The British used several of the species he drew, such as coffee, tea, cinnamon, and lemons, but had little idea where these products came from. In 1784, he completed a set of illustrations of these plants, plus a few others, such as the pineapple, obscure to the British as they were unable to withstand the long trips necessary to import them to England.

The Denver Gallery features a watercolor of The Fairmount Gold and Silver Mining Company, from 1874. In 1859, gold was first discovered in Colorado, and by the time of this drawing, mining was booming along the eastern edge of the Colorado Rockies. This image was drawn of Idaho Springs, one of the earliest gold sites, and today the first stop outside the Denver metro area as you head into the mountains.

The New York Gallery has a later print of a notable Depression era photograph from the Badlands of South Dakota. In stark black and white, it shows a parched cattle skull resting on cracked, arid, plantless soil. Arthur Rothstein's photograph became symbolic of the tough drought conditions being experienced in these already difficult times in the American West. However, Rothstein had taken photographs of the skull in a few locations, leading to charges that it was a fake. While Rothstein was more interested in the artistic aspects of his picture, it had come to symbolize the need for New Deal policies, and those who opposed Roosevelt quickly attacked the authenticity of this dramatic image.