Law and Legal History from The Lawbook Exchange 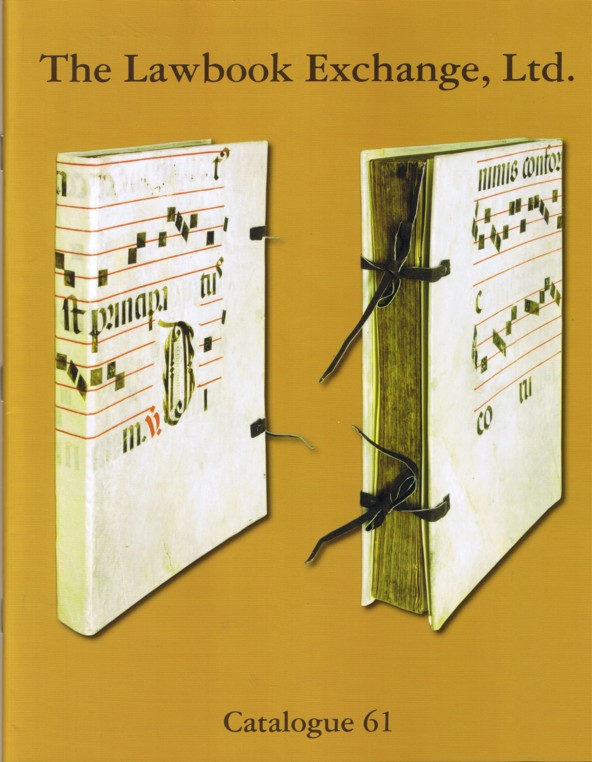 Law and Legal History from The Lawbook Exchange

The Lawbook Exchange has issued their Catalogue 61. Recently Acquired Books, Manuscripts and Other Items Relating to Law, Legal History and Politics, With a Notable Selection of Eighteenth And Nineteenth-Century Anglo-American Titles. It's all here, from dry, legal texts, to sensational trials, to biographies and photographs of famous legal personalities, to historically important works about the law. If it is related to the law, you may find it in a Lawbook Exchange catalogue. Here are a few of the items on the docket this month.

Item 29 is A Treatise on the Law of Libel and the Liberty of the Press, Showing the Origin, Use and Abuse of the Law of Libel, by a man who knew about the subject from personal experience. Author Samuel Cooper was a friend of Thomas Jefferson who was imprisoned in 1799 under the Sedition Act for libeling President Adams. Cooper was a prolific writer, writing books about law, science, medicine and politics. He used his time in prison to author the first American text on bankruptcy. Offered is a first edition from 1830 of his book on libel. Priced at $1,000.

William Barton was another Jeffersonian, and he dedicated this book to his esteemed President in 1802: Dissertation on the Freedom of Navigation and Maritime Commerce... Barton argues for the right to freedom of navigation by neutral merchant ships. This was the position of the United States at the time. The British and French were continually at war with one another, and each wished to stop American ships from trading with the other side. The Americans, naturally, wanted to trade freely with both. Interference with free trade brought America to the brink of war with both powers on several occasions, and finally into the War of 1812 with the British when that nation went too far with its impressments of American seamen. Item 6. $2,000.

Item 57 is a notable argument against the use of debtor's prison: Speech of Col. Richard M. Johnson, Of Kentucky, On a Proposition to Abolish Imprisonment for Debt, Submitted by Him to the Senate of the United States, January 14, 1823. Johnson noted that imprisonment for debt was the only instance where one citizen, at his discretion, could have another imprisoned. He considered this "repugnant to the spirit of the Constitution." Johnson was an eccentric senator who enjoyed an up and down political career. His reputation was buoyed by his Jacksonian principles and the report (neither affirmed nor denied by him) that he killed the Indian Chief Tecumseh in battle. It was brought down by his open, effectively common-law relationship with a slave woman and their children. The result was that he was defeated for the senate in 1828, was elected vice-president with Van Buren in 1836, but dumped from the ticket in 1840. $150.

There were two big stories in the Chicago area in 1860. One was the election of the state's favorite son, Abraham Lincoln, as President. The other was the sensational Burch divorce case. The Burches ran in the highest society. Isaac Burch was a wealthy banker, his wife a socialite and niece of one of the richest men in the world, New York Central Railroad tycoon Erastus Corning. He bankrolled her defense. Isaac sued for infidelity based on a supposed confession, which Mary Burch withdrew. With little else to go on, the jury acquitted her. Nevertheless, the couple naturally split, and Mr. Burch went off with one daughter to live in Paris, while Mrs. Burch took the older daughter and married a physician from Detroit. The full story of the trial can be found in item 103, the Only Complete Report of the Burch Divorce Case... published in 1860. $100.