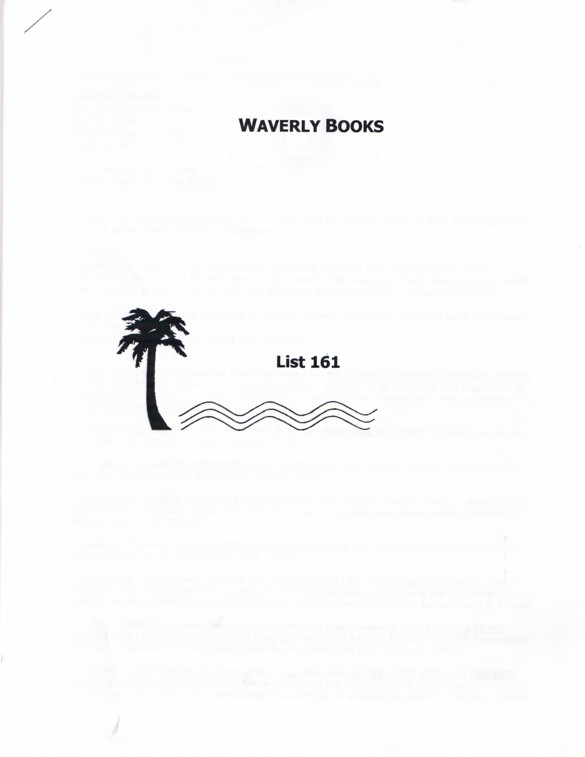 Waverly Books has issued a new catalogue, with the brief title List 161. Waverly regularly presents lists of the material they carry. This generally consists of 20th century literature, along with items pertaining to film, art, music, photography, and similar topics. Among these books are several biographies. A great many of the items are signed by their authors or subjects. We will take a look at a few offered for sale this month.

Item 68 takes us back to early in the career of F. Scott Fitzgerald. It's his second novel, The Beautiful and the Damned. This is a 1922 first edition, and Waverly notes, "A better copy would be difficult to obtain." Fitzgerald, though only 26 at the time, was already a celebrated writer, heading for all the personally destructive issues he and his famous wife Zelda would encounter in their short, tumultuous lives. Priced at $1,000.

If you are looking for something more recent, item 102 is Cormac McCarthy's No Country for Old Men. This 2005 work received four Academy Awards, including Best Picture. Offered is #298 of a limited, numbered edition of 325 copies, signed by McCarthy. This copy is in mint condition, still in its protective shrink-wrap. Waverly notes that this limited edition sold out upon publication. $1,500.

Wolfman Jack may not have quite the literary reputation of McCarthy, but his signed book could be harder to find. Item 149 is his book Have Mercy, a 1995 first edition. It is inscribed by the legendary disc jockey, television host, and movie actor (appearing as himself) of American Graffiti fame. Sadly, his signature on this book is uncommon as the Wolfman died suddenly in the early days of the book signing tour. Clap for the Wolfman. $350.

Item 34 is something everyone wants, even if it is a bit dated - a 1995 Anna Nicole Smith calendar. She has signed the calendar on its front cover. This was a sad year for Anna Nicole, as she became a widow that year, after barely a year of marriage. She had married oil billionaire J. Howard Marshall only a year prior, but their days together were short, perhaps owing to his being 90 years old. This led to a long, nasty battle with his children over the estate for the remainder of her life, which was cut much shorter than Marshall's when she died in 2007 at age 39. Reportedly, the cause was an accidental drug overdose. Smith's case made it all the way to the U.S. Supreme Court, establishing her place in history for something other than her body and her celebrity life. $450.

Item 113 is David Outerbridge's Without Makeup: Liv Ullmann. A Photo-Biography. This is a 1979 first edition, signed by the Swedish movie star. My guess is she looked fine even without her makeup. $75. Raquel Welch had no doubts about how she looked. Her 1984 book is entitled Raquel: Total Beauty. Item 114 is a first edition inscribed by her total beautiousness. $75.

Item 26 is 20 Tanks from Kasseldown, published in 1946. This is a single sheet broadside poem, the first separately published work by poet and novelist Charles Bukowski. It precedes his first book by 14 years. $750.