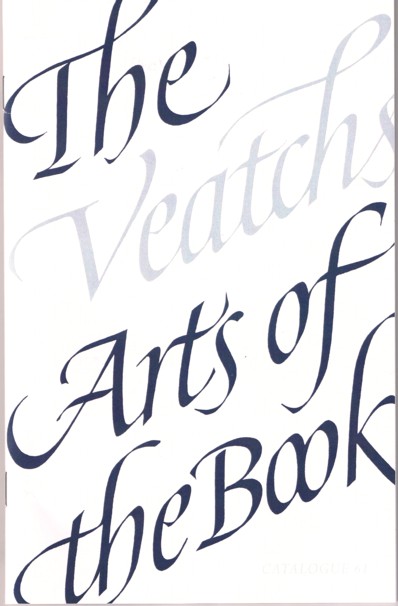 The Veatchs Arts of the Book has published their Catalogue 61: Recent Acquisitions. This is a catalogue for people who believe the title of one of the books offered within its pages: You Can Judge a Book By Its Cover. Perhaps not every book in this catalogue can be judged by its cover, though some certainly can, but if not its cover, than by other physical or artistic attributes. These are works that can stand without regard to the meaning of their printed words, though those words can certainly provide a worthy bonus. Here are a few of the works of the book arts being offered from these latest acquisitions at the Veatchs.

Item 44 is The Life Work of Dard Hunter. A Progressive Illustrated Assemblage of His Works as Artist, Craftsman, Author, Papermaker, and Printer. This limited edition (150 copies), two-volume comprehensive set of Hunter's career was published in 1981-83 by his son, Dard Hunter II. The senior Hunter began his career in 1901 at the Roycroft Studios, but by 1912, he purchased an old mill house in Marlborough, New York, where he built a paper mill. Hunter specialized in papermaking at this time, but in 1919, he purchased the "Mountain House" in Chillicothe, Ohio, where he expanded his interests to include printing and more. It was from this location that the younger Hunter published this retrospective of his father's work 15 years after the latter died. While Hunter's specialty remains papermaking, and he wrote several books on the subject, his wide range of interests led him to produce two books displayed at the Smithsonian with the notation, "In the entire history of printing these are the first books to have been made in their entirety by the labor of one man." He wrote, designed, typeset, printed and bound these books by himself, along with, of course, making the paper. In later years, Hunter also became involved in other artistic endeavors, such as pottery and furniture. Priced at $6,900.

Item 10 is one of the more extensive leaf books we have seen: The American Bible: Original Leaves from Rare and Historic Bibles printed in the Colonies and the United States during the Seventeenth, Eighteenth, and Nineteenth Centuries. This 1993 publication includes 38 leaves from historic American bibles. It begins with a leaf from the Eliot Indian Bible, the first bible printed in America (1663). It follows with several printed in indigenous languages. Since European language bibles were readily available from Europe, there was no need for bibles printed in America other than those in Indian languages. Other bibles represented in this book are the first American editions printed in English, French, Spanish and Hebrew, and the first New Testaments in Greek, Portuguese, Dutch and Swedish. $5,720.

Item 61 is John Brown's Body. No, not literally. This is an edition of Stephen Vincent Benet's epic poem concerning the American Civil War. This one was published in a run of 100 in 1980 by printmaker and artist Barry Moser, a limited run made from the original blocks prior to the printing of the trade edition. It contains eleven signed wood engravings. $400.