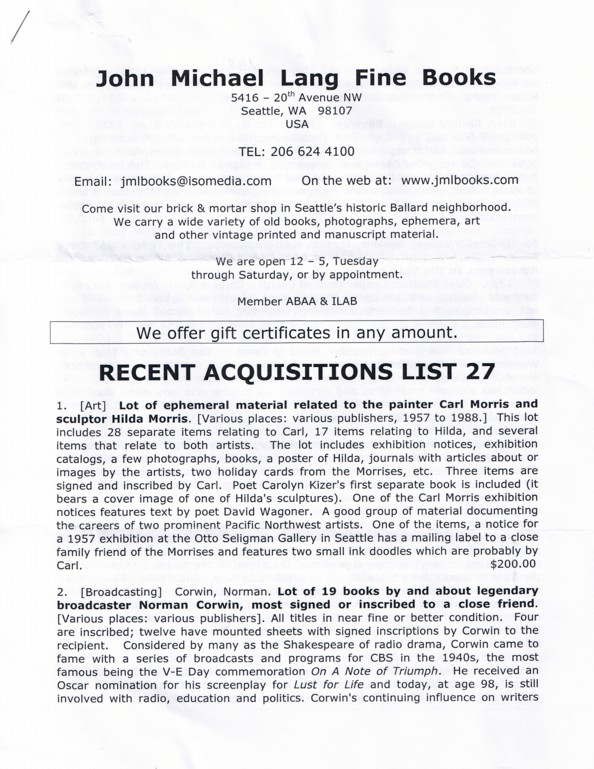 John Michael Lang Fine Books has issued a brief, but intriguing new catalogue: Recent Acquisitions List 27. Lang's catalogues are short, but you seemingly can find just about anything in one. Since they are hard to describe, we will just go straight to some examples of the varied items in this latest edition.

Life was easier and good in 1927. Item 19 is Charles Lindbergh's We! The Famous Flier's Own Story of His Life and his Transatlantic Flight... This 1927 biography was from a time when Lindy truly was lucky, an American hero. He had just concluded the first solo flight across the Atlantic, and was admired by crowds everywhere. In later years, his life would be disturbed by the kidnapping and murder of his baby, and his pro-German sympathies around the time of the war would turn most Americans against him. At this point, however, he was a national hero. This copy of his book is part of a special edition and is signed by Lindbergh. Priced at $1,750.

Lang describes item 22 as "[a] rare relic from the early history of African Americans in the movies." It is a large format 1923 promotional brochure for four silent movies from Norman Studios. Richard Norman was a white traveling filmmaker who determined he could do better by reaching out to the underserved audience of American blacks. He generated around eight silent movies in the 1920s. He used all-black casts in films which portrayed blacks in positive roles. This was certainly an exception for the era when most blacks were depicted in stereotypical, demeaning roles. Among the films promoted is The Green-eyed Monster, a film set in the railroad industry that he originally filmed with a white cast. Perhaps the most notable is The Bull-Dogger, a western featuring Bill Pickett, a black rodeo rider and "the colored man who invented bulldogging." The brochure makes clear, in all capital letters, "THERE IS NOT A WHITE MAN IN THE CAST!" $175.

Item 13 is a historical text with an interesting provenance. The book is volume 10 of The Library of American Biography, entitled Life of Nathaniel Greene, Major-General in the Army of the Revolution. The set was edited by historian and former Harvard President Jared Sparks. However, what is notable about this book about Revolutionary war hero Greene is that it was given to another war hero, though this time the commander of troops in the Civil War. A bookplate on the front pastedown reads, "Lieut. Gen. U.S. Grant, from Citizens of Boston. January 1, 1866." The Boston seal is at the center of the bookplate. This was evidently a gift from grateful citizens of Boston to the successful Civil War commander and future president. $650.

Item 29 is Mobilizing Woman-Power, by Harriot Stanton Blatch. The "woman-power" may sound like some recent women's rights title, but this book was published by The Woman's Press in 1918. Blatch was a daughter of the well-known women's rights leader Elizabeth Cady Stanton. Though not as well remembered, she was a major force in the women's labor movement and did much to mobilize women on the home front during the First World War. That effort is the subject of this book. After women were finally granted the right to vote in 1920, she focused her efforts on adopting the Equal Rights Amendment, a constitutional amendment providing equal rights for women which was never passed, though it is still brought up to this day. The fight for total equality in the workplace put her at odds with other women's advocates who favored protective legislation for women. Her book includes a forward from a progressive man of the era, former President Theodore Roosevelt. $450.