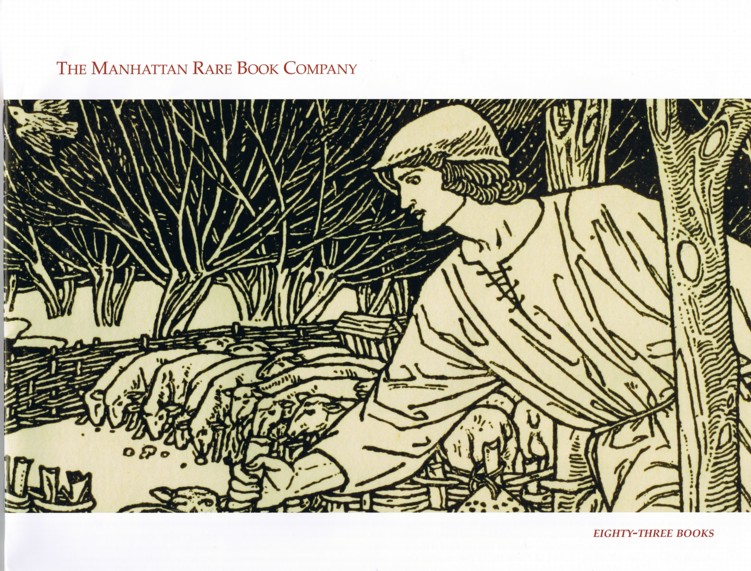 The Manhattan Rare Book Company has issued a catalogue of Eight-Three Books. Just as you can tell from their name where this bookseller is located, you can deduce from the title how many books are offered in the catalogue. While there is no one focus, many items in this catalogue are related to great literature, some to historically important people and events, and there is a large selection on science. There is a notable collection of works in the field of quantum theory and particle physics I will not try to describe as I'm not quite up on advanced physics. If you are, you should read this catalogue, and if not, there are lots of other books you will understand. Here are a few.

Item 1 introduced what it is undoubtedly the most recognizable opening stanza of any musical composition. You already know what this is without reading further. Offered is the first edition of the full score of Beethoven's Fifth Symphony. Right in the midpoint of the nine symphonies he composed, it is his signature work and that of all classical music. This copy is still in its rare original wrappers. Priced at $16,000.

Item 7 is perhaps the most important post-Biblical work of theology, at least in Christendom. It is Martin Luther's De Captivitate Babylonica Ecclesiae (Babylonian Captivity), published in 1520. Luther's beliefs were more than just a radical change from those accepted at the time, but amounted to an attack on the fundamental being of the Church itself. Luther saw the Church and the Mass as intercessions between man and God, rather than a means of connection. The Mass, he opined, served the financial interests of the intermediaries more than the parishioners. It created a split that proved to be permanent (or five centuries and counting). $48,000.

Item 49 is the source of one of the most memorable of wartime quotations: "Never in the field of human conflict was so much owed by so many to so few." The remark was given during A Speech by the Prime Minister in the House of Commons on August 20, 1940. Britain had been under relentless attack by the German Air Force, and it was left to the small number of British pilots (the "so few") to save the nation. But Churchill knew that it was more than just the British but all of western civilization that depended on England, then the only power defending the West, to stop the Germans, at least long enough until the Americans and others decided their survival was also at stake. $1,250.

During the latter stages of the war, after Roosevelt died, Churchill's ally in its conduct became Harry Truman. Item 45 is a signed photograph of Truman with his daughter Margaret at the Army-Navy football game in 1950. $2,300.

Item 36 is a first edition of a nonfiction book by Ernest Hemingway: Death in the Afternoon. Hemingway was a devotee of bullfighting, this rather gruesome but intense Spanish sport. This copy is signed by Hemingway in its month of publication, September 1932, in Cooke, Montana. $27,000.