The Arctic and Canada from Bjarne Tokerud Bookseller 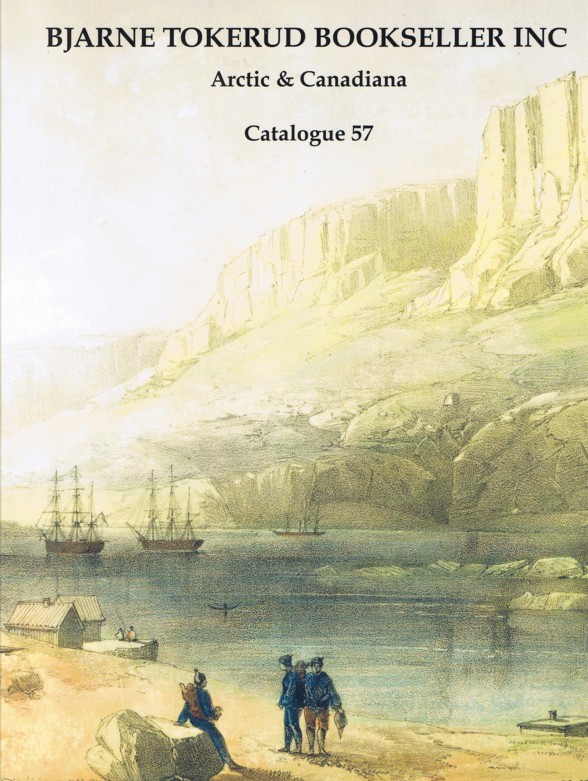 The Arctic and Canada from Bjarne Tokerud Bookseller

It's time to put on your fur coat and snowshoes. We recently received Catalogue 57 from Bjarne Tokerud Bookseller, entitled Arctic and Canadiana, Including World Voyages. This is one of those rare catalogues where the Canadian books represent the warm climates. I remain astonished every time I read of these Arctic explorations. So many attempts were launched to find a Northwest Passage, most requiring stay-overs of several winters in Arctic cold with little shelter but their wooden boats. Frequently, those would be frozen in, and the explorers would be forced to traverse the frozen wastes in search of rescue. Nevertheless, the incredibly brave and hardy explorers repeated their searches over and over, even though so many failed in their ultimate goal. Perhaps their efforts will finally be rewarded in the years ahead as global warming has finally opened the possibility of there becoming a navigable Northwest Passage. Now, let's take a look at this fine catalogue.

Some people credit the 1857 expedition of Robert M'Clure as being the first to discover the Northwest Passage. This was one of many missions sent out to find the lost Franklin expedition, now missing a decade. They did not find Franklin, but found, sort of, what Franklin was seeking - the passage. Their ship, which entered the Arctic sea from the west, was iced in, and the crew was forced to travel over land and ice. From there, they spotted the eastern side of the passage, therefore the claim to be the first. Still, if they had to travel on foot, it is hard to really consider this a passageway. Item 5 is A Personal Narrative of the Discovery of the Northwest Passage, by Alexander Armstrong, surgeon and naturalist on M'Clure's ship. Priced at $5,000 (Canadian dollars, or roughly $4,142 U.S.).

There is no doubt that Roald Amundsen found the Northwest Passage, as he was the first to successfully navigate the sea route from the Atlantic to the Pacific north of the Canadian mainland. While this achievement, which had evaded explorers for centuries, was certainly impressive, it was not of much practical use in terms of finding a faster shipping route. Amundsen had to winter over in the Arctic for three years before finally emerging in Pacific waters. A large ship would not have made it at all. Item 13 is Amundsen's The Northwest Passage. Being the Record of a Voyage of Exploration of the Ship "Gjoa" 1903-1907. Amundsen would go on a few years later to be the first person to reach the South Pole. $950 (US $787).

Sir John Franklin never found the Northwest Passage, and he is perhaps better remembered for all the many voyages sent out to find him after his expedition disappeared than for his own accomplishments. If he did not always have luck in his explorations, he had exceptionally good luck in choosing wives. Both were very loyal. Item 40 is John Franklin's Bride. Eleanor Anne Porden, by Mrs. Gell, published in 1930. Miss Porden was already an accomplished poet when she met her husband in 1818. Franklin was about to embark on his first Arctic trip at the time. This was followed the next year by a longer, overland expedition up Canada's Coppermine River to the Arctic coast. Franklin did not return to England until 1823, whereupon he and Miss Porden were wed. They had but two years together. The new Mrs. Franklin suffered from tuberculosis, and despite deteriorating health, she insisted that Franklin not sacrifice his next trip to the Canadian north. She died shortly after he left. $300 (US $248).