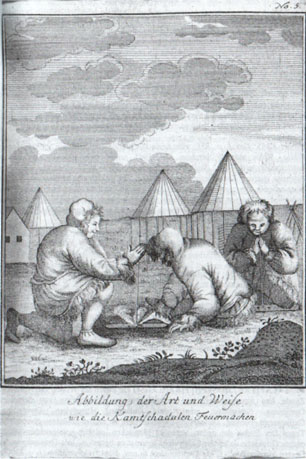 
Mutiny on a grander scale was threatened when a plot was uncovered to assassinate England’s King Charles II in 1683. This wasn’t successful, and some of the conspirators paid with their lives. Charles addressed his subjects in His Majesties Declaration to All His Loving Subjects, Concerning the Treasonable Conspiracy Against His Sacred Person and Government… The title is a bit ironic as Charles was anything but “loved” by his subjects. Item 16. $315.

Item 9 is an unusual book. It was written by Helen Blackwood, aka Lady Dufferin, and is entitled Lispings from Low Lattitudes; or, Extracts from the Journal of the Hon. Impulsia Gushington. To understand the strange title, you need to know two things, besides the fact that the Lady had a sense of humor: (1) travelogues by ladies of wealth was a common genre of the time, and (2) her son had written a book called “Letters from High Latitudes.” The work by her son, Lord Dufferin, was a serious travel book about the far north. It served as the basis for Lady Dufferin’s parody about a trip by a wealthy lady to Egypt. However, this did not represent any tension between mother and son. Married at 18 and widowed at 33, Lady Dufferin and her only son were as much best friends as mother and son, and both must have enjoyed the humor of this parody. $300.

A sad journey is the focus of the two-volume Scott’s Last Expedition. Robert Falcon Scott and his team of British explorers set off for the South Pole in 1911. At the time, no one had ever reached it. Scott and five of his companions finally did reach their target on January 17, 1912, but only to find they had been preceded a month earlier by Roald Amundsen. Then, due to extreme cold and a shortage of provisions, Scott and the others who reached the Pole all perished on the way back. Volume 1 consists of Scott’s journals while volume 2 is a report of the journeys and scientific work of the expedition's survivors. Item 95. $250.

Another travel to the cold, but not that cold, territories is found in Henry Hind’s Narrative of the Canadian Red River Exploring Expedition of 1857 and of the Assinniboine and Saskatchewan Exploring Expedition of 1858. Hind provides some of the first mapping of the area and descriptions of the Indians he met along the way. What is particularly interesting about this book is that it was the first Canadian expedition to document its discoveries through photography. Item 40. $1,950.

Another account of a cold journey is found in Stepan Krasheninnikov’s The History of Kamtschatka, and the Kurilski Islands, with the Countries Adjacent… This, thankfully, is an English translation from the original Russian, and was printed in 1764. Krasheninnikov was part of Bering’s second expedition which provided some of the earliest descriptions of the Aleutian Islands and Alaska. Item 47. $3,500. If English makes reading the work too easy a challenge, there is a German translation available as well. Item 48, printed in 1766. $3,525.