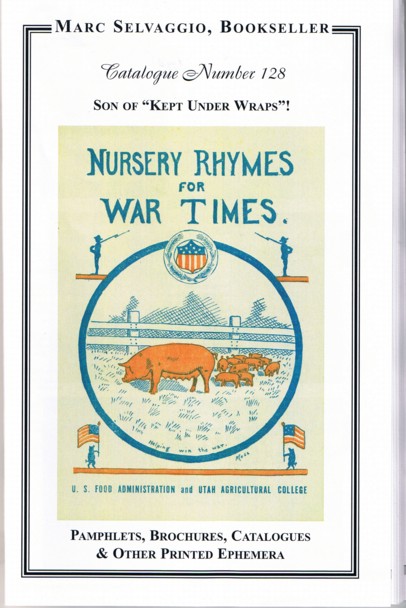 Some catalogues are too captivating, too entertaining to keep under wraps. Such is Son of "Kept Under Wraps" from Marc Selvaggio, Bookseller. Actually, the "wraps" mentioned in the title refers to books coming in wraps, that is, paper wrappers, rather than hard covers. Nevertheless, we feel the need to unwrap this catalogue and tell you what is inside, as it is one of the more amusing catalogues you will find. It is filled with the odd and unusual, pamphlets that can be hilarious without ever meaning to be. Indeed, nothing can be as funny as what was once meant to be serious. Here are a few examples of what we mean.

The Van Graef Medical Co. had numerous products for men in A Private Treatise Addressed to Youth, Manhood and Old Age. It contains the usual nostrums for male sexual issues now constantly described on late night television, but the piece de resistance was something called the "electrical vari-clamp." Selvaggio describes it as "a sort of battery-operated jock strap meant to heat up the testicles." Would anyone like to try this thing out? The pamphlet includes numerous testimonials from proverbial satisfied customers. Item 353, published in 1888. Priced at $50.

For those who enjoy singing, there's the San Francisco Memorial Song, a 1906 ditty from William E. Cornell. It celebrates the San Francisco earthquake and fire. Item 11. $45. If fire and earthquake aren't your favorite tragedies to put to song, there is The Johnstown Flood, Illustrated for Piano by Alberto Rivieri, from 1889. This item is "Respectfully Dedicated to the Sufferers," the sufferers presumably being the victims of the flood, not the listeners to the song. Item 15. $45.

As long as we are on the subject of monumental tragedies/entertainment, item 101 was a traveling extravaganza depicting the destruction of Pompeii by a nearby volcano. This piece was prepared for a display at Henry J. Pain's show in Cincinnati in 1891. It is entitled Pain's Last Days of Pompeii, though it might equally have been called "Pompeii's Last Days of Pain." $125.

Item 7 is a promotional for the Sacramento City and County Christian Endeavor of 1897. We are told this was to be "the most memorable event since the admission of the State to the Union." Evidently not much exciting happened in California between 1850 and 1897. $100.

Item 47 is the Boston Salvation Army's A Quarter for the Babies. We presume this 1908 "fresh air camp" appeal was seeking quarters to send children to camp, rather than selling babies for a quarter. $50.

Kroger's is today the largest grocery chain in America, and here is a guide to the secrets behind their success. Item 124 is a 1925 manual for Kroger store supervisors. It asks such things as, for the pickle and olive display, "Are displays clean and is scum taken off brine?" Happily, pickles and olives are today sold at Kroger's in jars, in case the managers forget. $45.