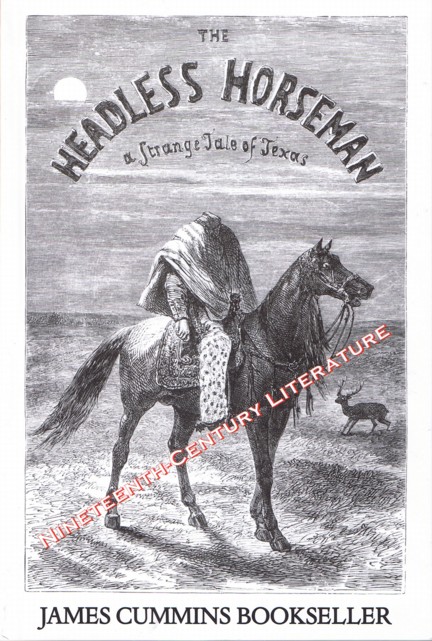 James Cummins Bookseller has just released a catalogue of Nineteenth Century Literature. This is not, for the most part, filled with names you instantly recognize. There are a few Dickens items here, but otherwise, most of these names were not immediately familiar. In some cases, that reflects my own shortcomings in knowledge of 19th century writers, in others, it is the authors who are obscure. Nevertheless, this catalogue is great fun to read, and that would undoubtedly be true of many of the books offered as well. Here are a few.

Item 59 is By Order of the Czar: A Drama in Five Acts, by Joseph Hatton. The author has inscribed this copy to Bram Stoker, the author of Dracula. Pens Hatton, "'For Auld Lang Syne' Bram Stoker, from his friend Joseph Hatton July 1904." Hatton was among Stoker's circle of acquaintances, but perhaps not his favorite, as an account of an American tour by Stoker has him describing Hatton as "an awful ass." Hopefully his book is better. Priced at $950.

Here is an author I did not recognize: Pierce Egan. That makes me doubly ignorant, as there were two of them. Item 33 is The Pilgrims of the Thames, in Search of the National! by Pierce Egan (the elder). This is an 1839 second edition with 24 hand-colored illustrations designed by Pierce Egan (the younger). $500. The younger Egan was also a writer, and item 34 is his book The Flower of the Flock, published in 1858. This copy is inscribed by the younger to his daughter, who was not named Pierce, but Violet Kate. $3,000.

James Malcolm Rymer was an author of countless penny dreadfuls, under this name and numerous pseudonyms (Rymer is probably his real name, though even this is uncertain). Several of his pseudonyms were anagrams of his name, such as Malcolm J. Merry. Item 136 is his 1855 book The Unspeakable; or, the Life and Adventures of a Stammerer. The book is dedicated to James Hunt, author of a work on stammering, who has inscribed this copy. Rymer would have drifted into total obscurity but for the belief (not certain) that he authored the book String of Pearls, which introduced the beloved character of Sweeney Todd to the world. $300.

Here is a great title, though I have no idea what it is about: Snarleyyow, or the Dog Fiend. The author of this 1837 work is Captain Frederick Marryat, a writer of seafaring tales better known for Mr. Midshipman Easy. Item 95. $750.

Item 73 is Michael Dred Detective: The Unravelling of a Mystery of Twenty Years. This 1899 mystery was written by Marie and Robert Leighton, the first husband-wife mystery-writing team. It is also the first detective novel where the detective himself is the murderer. Did we just give something away? $600.

Item 55 is a classic turn of the century collection of supernatural tales with a mystery of its own: Tales of the Wonder Club, By "Dryasdust." It isn't hard to figure that "Dryasdust" is not the author's real name. This is an 1899 first edition, but it was republished in 1903 with the author's name now given: M.Y. Halidom. However, it turns out that this is a pseudonym too. The true identity of the author was the subject of much speculation at the time, but was never revealed. In 2005, a grandson disclosed that the author was Alexander Huth, but we cannot vouch for this. $750.