The Spalding Collection of Western Americana from Randall House 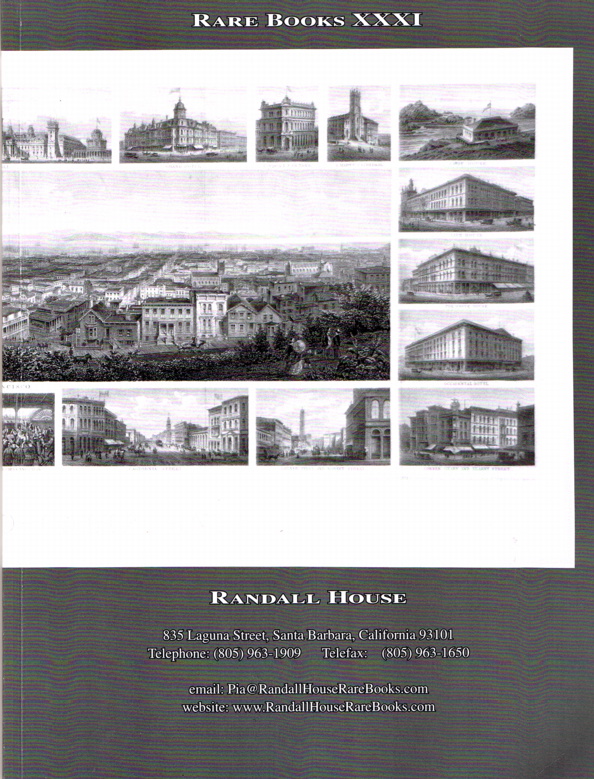 The Spalding Collection of Western Americana from Randall House

This month we have received our first catalogue from Randall House, of Santa Barbara, California. Randall House trades in all kinds of books, from literature to Americana, fine press, books about books, sporting books, illustrated books, manuscripts, and more. However, this catalogue, their 31st, is very focused, as it offers items from The Caroline Spalding Collection of Western Americana. It is filled with western items, in particular those from California, but also contains a few items Mrs. Spalding obtained during a two-year residence in England.

Caroline Spalding was the daughter of pioneer California oilman Charles A. Canfield. He was a partner of Edward Doheny, whose wife (later widow) Estelle put together one the greatest book collections ever by an American. Canfield and Doheny became quite wealthy after discovering oil near Los Angeles in the late 19th century. Canfield's daughter visited many oil sites with her father, which piqued her interest in California history. Caroline Canfield married Silsby Spalding in 1911. Mr. Spalding became the first mayor of Beverly Hills. It was at this time that Mrs. Spalding began her collection. That interest continued until she died in 1970.

Offered are 179 items from Mrs. Spalding's collection. Randall House notes that some of these books originally came from the legendary San Francisco bookseller John Howell Books, in business from 1912-1984. Ron Randall and Pia Oliver of Randall House are veterans of that notable firm. Here are a few of the items from the Spalding collection.

Item 67 is a major work from California's first printer, Agustin Zamorano. It is the first edition in English of The manifesto which the General of Brigade, Don Jose Figueroa... (Governor Figueroa's Manifesto). Zamorano had originally published this book in 1835 in Monterey. This English edition was published in 1855 in San Francisco. The book deals with Figueroa's unwillingness to turn over mission land to colonists who arrived in 1834. Priced at $5,000.

Item 141 is another California first - the first book on California written in English by a resident. The title is Life in California During a residence of several Years in that Territory, published in 1846. Author Alfred Robinson came to California in 1829 and married into a prominent Mexican family. He provides a description of the territory in the days when it was still part of Mexico. $1,500.

Item 122 is Samuel Augustus Mitchell's Mitchell's New Map of Texas, Oregon and California with Regions Adjoining. This publication includes 46 pages of text along with Mitchell's map. The map shows what is today's American West in 1846, post Texas Revolution but just prior to the Mexican War and America's resolution of the territorial dispute with Britain over Oregon. Mitchell is unabashedly pro-American. He describes Mexico's Upper California (today's U.S. California) as having declared its independence and now being settled by Americans. Oregon, which in his map goes all the way to 54-40 (taking in much of British Columbia), he states is all under an "indubitable" American claim. Texas is granted the generous borders it claimed at the time, ranging from the Rio Grande to the narrow strip of land rising all the way into today's Wyoming. All of these borders would be radically changed within a few years. $9,000.