Some Giants of Science and Much More from Dragon Books 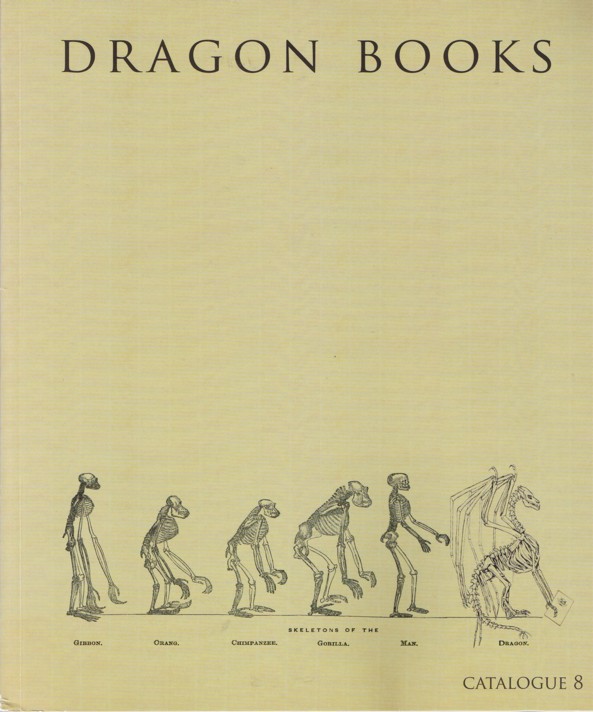 Some Giants of Science and Much More from Dragon Books

We have just received Catalogue 8 from Southern California bookseller Dragon Books. It is a spectacular catalogue with some spectacular offerings. Dragon Books does not specialize in any one particular field. What they do appear to focus on is books in the very best condition. Prices vary from a couple of hundred to a couple of hundred thousand dollars, but the excellence of condition is constant. This is a thoroughly illustrated and thoughtfully described presentation, up to the quality of the books being offered.

We will start with science as Dragon is offering a couple of the most important books in the history of the field. Item 1 is what some consider the most important, and possibly most controversial scientific book ever written, a first edition, first issue, of Charles Darwin's Origin of Species by Means of Natural Selection... Darwin's studies had led him to his revolutionary theory of what happened in nature, a logical, scientific explanation, but contrary to the most fundamental beliefs of most people's theology of the day (and still today for many). However, its consistency with observation resulted in a fundamental change in the way people viewed themselves and the world around them. When the book was published in 1859, it sold out this first run of 1,250 in one day, such was the significance of Darwin's findings. Dragon describes their copy, which includes the 32 pages of publisher's advertisements dated June 1859, as "[a] stunning, untouched copy...rare in such exemplary condition!" Priced at $200,000.

If you already have your copy of the Origin, and are looking for a scientific title that rivals Darwin in importance, here is one: Philosophiae naturalis principia mathematica, by Sir Isaac Newton. Copernicus and Galileo had led the way in discovering the secrets of the universe, most notably, that the bodies in the heavens did not revolve around the Earth. They were able to describe what was happening, but it took Newton to explain why the universe behaves as it does. Newton explained the underlying laws, the rules of motion and gravitation, in the Principia. Item 13 is the rare second issue of the first edition, published in 1687. It has been estimated that 250-300 copies of the first issue were printed, versus only 50 of the second. The bindings of most second issues suggests that these copies may have been set aside to be shipped from England to the continent. $300,000.

We will note briefly that Dragon Books has another giant of science to offer: the first Latin edition of Galileo's Dialogue, which promoted his view of a heliocentric solar system. This was the book that changed how people viewed the universe, while getting poor Galileo placed under house arrest for the remainder of his life. Item 6. $50,000.

Item 4 is a fine copy of the first edition, first issue (with first issue dust jacket) of F. Scott Fitzgerald's Tender is the Night. This is not a happy tale. It tells of a couple where the wife's mental imbalance eventually brings down her husband. It hit close to home, as at the time of publication (1934), Fitzgerald's wife, Zelda, had been institutionalized. Neither fared well after this, Scott becoming alcoholic, broke, and died six years later, while Zelda spent most of the remainder of her life in institutions before dying in a fire in 1948. $35,000.