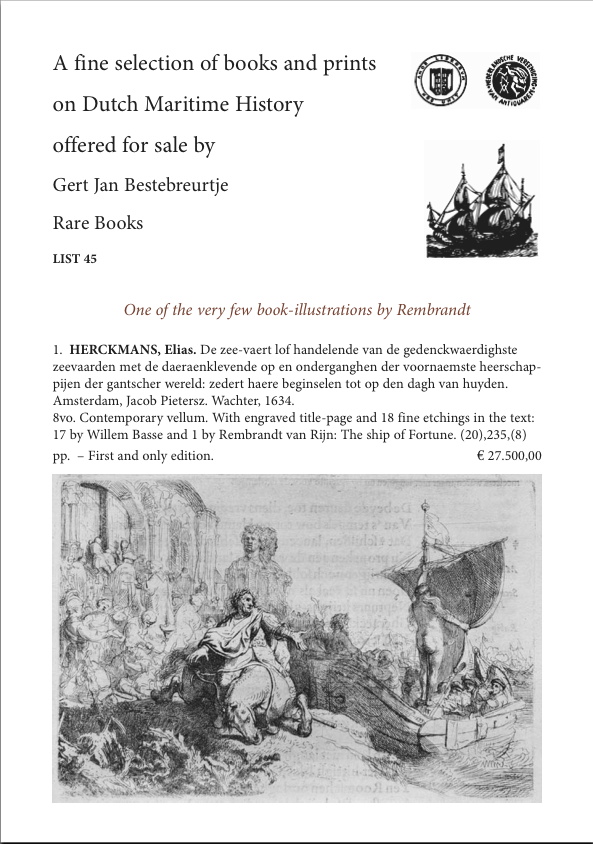 We recently received List 45 from Gert Jan Bestebreurtje Rare Books entitled A fine selection of books and prints on Dutch Maritime History. Rather than the typical Bestebreurtje catalogue, which can run to over a thousand items, this is a narrowly focused and limited collection of items, 42 in all. Still, this is a topic with great importance, as for many centuries, the Dutch were a major if not the most important force on the seas. The Netherlands, and its privately run colonial and seafaring power, the Dutch East India Company, offer a rich history of maritime exploits.

The catalogue is divided into several sections. It starts with various books and engravings on general Dutch maritime history. It then presents some bibliographies and portraits of famous Dutch seamen and drawings of Dutch vessels. There are several accounts from the Anglo-Dutch Wars. The English and Dutch did not get along well during the 17th century. Around the time the British kicked the Dutch out of New Amsterdam, and renamed the town "New York," the two were battling in the seas off each other's coasts. This was the second of three Anglo-Dutch Wars, and despite the retreat from North America, the Dutch otherwise fared reasonably well. Finally, the catalogue provides several works on whaling.

Item 25 is a broadside celebrating the Dutch "victory" in the Four Days Battle of the Second Anglo-Dutch War, headed Pertinente Afbeeldinge van de victorieuse vierdaeghsche zeeslagh... This was an unusually long sea battle, lasting from June 11-14 of 1666. The Dutch eventually chased the English fleet from its coast. While something of a stalemate, the damage done to the English fleet was more extensive than that done to the Dutch, so it was sort of a victory. The broadside includes a description and image of the battle at sea. Priced at €2,950 (euros, or approximate US equivalent of $3,776).

The Dutch hero of this and other battles against the British was Admiral Michiel de Ruyter. He was admired by both the public and his sailors through a long, distinguished career. He participated in all three of the Anglo-Dutch Wars, finally losing his life in 1676 when struck by a cannonball while fighting the French. The small upstate New York town of De Ruyter is named for him. Item 14 is Gerard Brandt's biography of the Admiral, Het leven en bedryf van Michiel de Ruiter (third edition from 1701). €1,250 (US $1,600). Item 15 is an allegorical etching of De Ruyter's mausoleum, circa 1677. €1,250 (US $1,600).

Item 6 is an engraving with text celebrating the victory of the Dutch East India Company over the Kingdom of Macassar. Macassar was an independent state in what is now eastern Indonesia. The kings were tolerant of various nationalities, allowing for free trade from its port. This did not sit well with The Dutch East India Company, which was determined to dominate trade from the region. The Company overpowered the kingdom in 1667, assuring their monopoly of trade. The engraving by Romeyn de Hooghie is headed Victorien der Nederl. Geoct. O. Compagnie... and was published in 1669. €2,750 (US $3,520).

Item 1 is Elias Herckmans' De zee-vaert lof handelende... published in 1634. This work is most notable for its 18 etchings, one in particular. It is one of the rare book illustrations by the great Dutch artist Rembrandt. It can be seen on the cover of this catalogue. €27,500 (US $35,201).