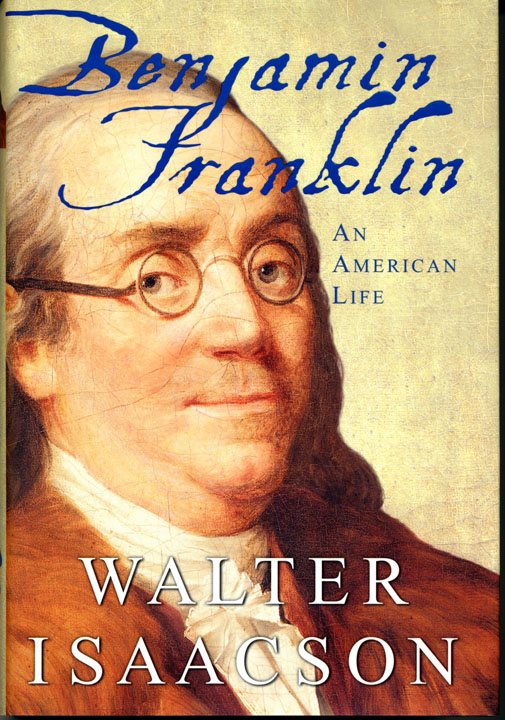 
A book review by Bruce McKinney

Benjamin Franklin hangs on around the edges of the first tier of important American personages. He’s not quite with Washington and Jefferson but he’s also clearly ahead of both the Adams, the various generals of the Revolution, other signers of the Declaration of Independence and other framers of the constitution. He’s very significant but not to be compared with Lincoln. It remains to be seen how he ultimately stands up against the Roosevelts of the 20th century. This is in absolutely no way intended to denigrate the man. In many respects he was the greatest American of his century but he was born a bit earlier in the 18th century than George Washington, was an old man by the time of the Revolution and spent a considerable time in Europe ministering to American interests. In truth, he was far more than an important political figure. He was America’s first great publisher and also its first important scientist. He defies easy categorization because he belongs among the eminences of his century in many fields. Let’s say it and be done. He was a renaissance man.

This opening paragraph is prompted by my recent reading of Benjamin Franklin, An American Life, 493 pages of enjoyable text followed by another 100 pages of footnotes and index. I found it an easy way to spend a few hours reliving Mr. Franklin’s life. For book collectors, Mr. Isaacson provides both a fresh examination of Franklin as well as impetus to develop a focused collection of one aspect of his career such as his printing, his entire career, his place in the founding of America or simply the ephemera that directly and indirectly traces to him, his reputation and to those things he made a lasting impression upon. Whether you collect kites, keys, almanacs, Revolutionary War documents, material on his inventions – among which is the Franklin Stove, or Franklin from the European perspective to only name a few of the possibilities, Benjamin Franklin is highly collectible, widely sought, and at least among the second tier possibilities still very available – even if no longer inexpensive. His publication, Poor Richard’s Almanack, was published in its original form beginning in 1732 (for 1733) and continuing until 1758. These extremely collectible items are going to most often appear at auction where the market will set the price. Of course you can always run “Benjamin Franklin” in your daily eBay searches. Today there are 288 items running from the sublime to the ridiculous. There is a copy of Franklin’s Pennsylvania Gazette with a buy-it-now price of $450, a 1,000 (pound) bond in his favor dated 1786 with a starting bid of $200 and even a letter described as his and dated 1785, Passy (France) with a starting bid of $10,000. At the other end of the spectrum there are two copies of Classic Comic #65, Benjamin Franklin with starting bids of $1.99 and $5.95. There are also plates and of course stamps and even a CD of this book I’m discussing – with a current bid of $7.95.