Special Books from Australia, the South Seas, and More from Hordern House 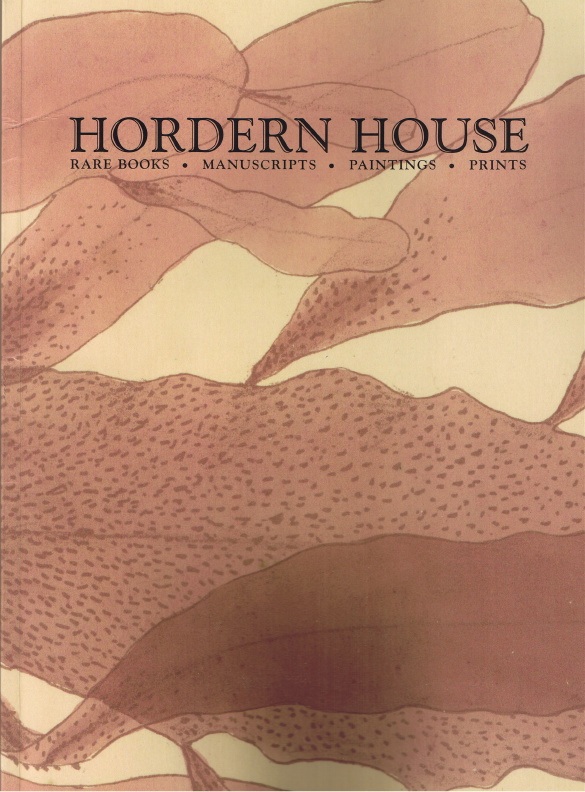 Special Books from Australia, the South Seas, and More from Hordern House

Hordern House, the major Australian bookseller, always provides special catalogues, so the title of their latest is most appropriate: 2008 Special Catalogue. This is a large, thick, and beautiful presentation devoted to just 40 items. Obviously, these are special item to warrant such a presentation. Offered are important works from the 17th-19th centuries, all with some Australian, or at least South Seas islands connection. That is not to say collectors of other parts of the world will not be interested, since many involve journeys that touched different lands. It is hard to travel from Europe to Australia without seeing other places along the way. Nonetheless, this catalogue will be of particular interest to those who collect Australia, the South Seas, and for those whose interest is Americana, Hawaii. Here are some samples of these very special books.

We will start with an item that could relate to the first European contact with Australia... or not. French navigator Binot Paulmyer de Gonneville visited somewhere around 1504, possibly Australia, but possibly somewhere oceans away. No one can be certain. Gonneville thought he had reached the massive southern continent, but since that place does nor exist, we can safely rule it out. Wherever he landed, Gonneville brought back a young native man named Essomeric, whom he promised to return to his home. Unfortunately, he was never able to do so. Gonneville felt badly that he could not keep his promise. As a consolation, he gave Essomeric his own family name, and married him to one of his relatives.

Fast forward three generations to 1663, when Paulmier de Gonneville publishes his book Memoirs touchant l'etablissement d'une Mission Chrestienne dans le Troisieme Monde... (establishment of a Christian mission in the third world). This Gonneville was the great-grandson of the from-wherever native originally known as Essomeric. As such, Paulmier de Gonneville believed it was his duty to Christianize his long-lost relatives, wherever they might be. He thought of them as "Australians," although his Australia would have been that great mythical southern continent that Cook would later prove did not exist. Paulmier never got to undertake his mission, though he was placed in charge of missions to this non-existent place. What remains unclear is where Essomeric actually came from. Perhaps it was Australia, and the original Gonneville was the first European to reach Australia. However, this story seems to be relatively unknown even in Australia, where Quiros is generally believed to be the first to make contact, or almost make contact, with the continent. It seems that competing theories are that Gonneville actually picked up Essomeric in Brazil or Madagascar. It appears that Brazil is generally the most common belief. It's hard to imagine how Gonneville found his way back to France without knowing whether he came from the vicinity of Australia, Brazil, or Madagascar, those locations being nowhere near each other. One thing is certain - he was not where he believed he was, the fabled, mythical southern continent. Item 19 is the great-grandson's rare book. Priced at AU $115,000 (approximate US equivalent of $74,486).